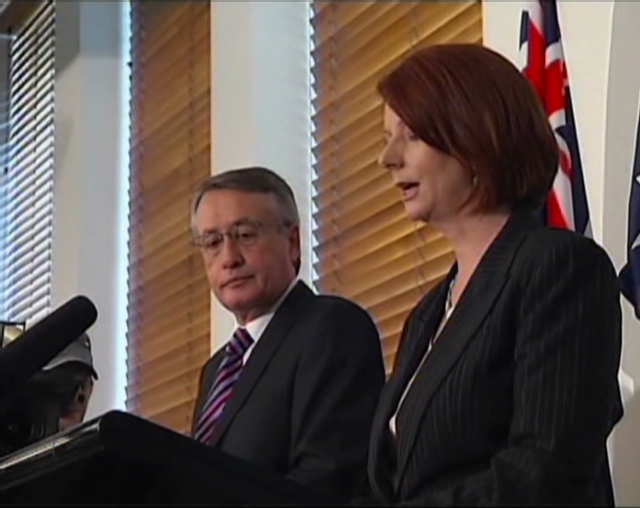 Julia Gillard, the beneficiary of a superior postal voting campaign.

It’s not only in Britain that postal and proxy votes are harvested and used to win seats by ‘well-organised’ left wing political parties.  This week’s Australian election which would otherwise have thrown out the Labor Government, is now stuck with a Hung Parliament, and according to the commentators, the reason is postal voting, or as they call it, the government’s ‘superior’ postal voting operation.


BRISBANE: Sitting Labor MP Arch Bevis is trailing former Liberal MP Teresa Gambaro by 828 votes with 70 per cent of the vote counted. That leaves a lot of pre-poll and postals to be counted. Labor describes the contest as “neck and neck”, relying on its superior postal vote processes to get Bevis across the line despite a swing against the government of 5.3 per cent.
CORANGAMITE: Sitting Labor MP Darren Cheeseman leads the Liberals’ Sarah Henderson by 1189 votes with 80 per cent of the vote counted. Labor is “quietly confident” its postal vote campaign will get Cheeseman home despite a swing against Labor of just under 1 per cent.
Until postal voting is brought properly under control, it seems no right wing party will be able to win an election, having ‘inferior’ postal voting operations – or as most people would say, being of a disposition not to cheat – not something to affect left wing parties called Labour, Labor, Liebour etc.
In Britain Cameron winning was a miracle when you consider what he was up against.  All the marginals went to Labour.  Only in the outliers where Labour did not mount ‘superior’ postal voting operations, imagining the seats safe, did he gain ground.  Now we see the same shit deciding the future of another formerly great democracy.  It’s time the postal voting door was closed.

Gillard needs 1 of the 3 conservative independents to form a government, and 1 is very positive to new climate change legislation. Tony Windsor of New England.
If Labour get in, they will have to bend over to numerous Green demands on climate change and introducing a carbon tax on urban and rural industry polluters. Something which the other indcependents would not want as it would hit the costs of their constituents.
I explained 6 weeks ago that a 5 percent lead over labour was insufficient for the “Tories” to win.
The high green vote means that labour gets in by the back door. The failure of the Tories to highlight this in advertising, that avote for the Greens as a proterst was essentially a vote for labour, was a bad oversight and mistake.
With some people protesting against labour by voting Green, their votes simply returned to Labour under a preference deal that was organised quickly and well in advance. Labour gave its senate preferences to the Greens, guaranteeing they would become a major player in the upper house and hold the government to ransom.
But Labour needed to do this so that they had a chnace of winning lower house seats on reciprocal Green preferences.

I predicted in advance yesterday that labour would win 2 or 3 seats and the coalition would fall just short of a majority.

With a Green independent likely to be winning a seats under this crazy Oz AV system with just 22% of the vote, clearly the system has its faults.
If a party in Oz can get into 2nd place and garner preferences they can win seats they have no right to do, so I can see why the Liberals in the UK might favour it.
It makes you think what AV would do to Britain – consign us to permanent coalition governments, where minority parties set the agenda and frustrate the mood of the majority.

The mood of Australians, after 19 consecutive years of economic growth, should be grateful to the incumbent.  Yet with the world looking set for a downturn, Australians must fear a new decline is coming.  Gillard did the right thing to run for an electoral victory now before the real economic picture becomes clear to voters.  It’s just annoying to think that she would have lost were it not for the various poll rigging measures that have been introduced.

But the election comes against a backdrop of enduring economic growth and increasingly lucrative trading links with emerging Asian powers led by China. After side-stepping the Asian financial crisis in 1997, the downturn after the dotcom collapse in 2001 and now the worst of the global financial crisis, Australia has managed to maintain an uninterrupted growth streak now into its 19th year. The country, a member of the Group of 20 leading nations, can rarely have had a more golden period since European settlement began 232 years ago.
While most large industrialised nations emerge from painful downturns with huge government debt, Australia, which skirted recession by recording just one quarter of gross domestic product contraction, forecasts a return to surplus in less than three years. Unemployment peaked at 5.8 per cent and is now at 5.3 per cent, a little more than half that of the US and eurozone.

Australians will find themselves in a higher tax environment just as the economy turns down, as a result – and which is not what the majority voted for.   As in Britain the right wing needs to get plus 5% just to get level.  In Britain the figure is 8%.  If postal voting scams were eliminated, the right wing parties would all now have comfortable majorities.  That is why they are tolerated.

TONY ABBOTT, the coalition leader says that he won 400,000 more votes than Labor and so has the moral right to govern Australia.  Let’s see which way the three Independents jump.