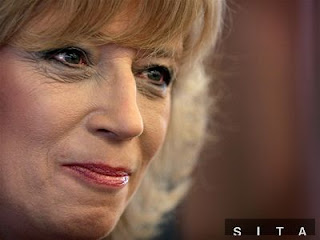 Since the Lisbon Treaty was signed, a fog has descended over European capitals.  In Britain, Cameron has said little against anything that the EU either does, says or stands for, with politicians nearly everywhere unwilling to speak out against the EU, now it has acquired so many powers over everything and everyone that moves.

The powers acquired are real enough, but in the end of the day, the power within the Brussels edifice still depends to a large amount on bullying, and stopping opposition that way.  The Irish, for example, wanted to reject Lisbon a second time, but were intimidated into voting Yes by economic threats.  They must already be wondering if that was the right thing to have done.

There are, though, places where the politicians are not cowed into silence and compliance by these kinds of threats.  These politicians come from places where they grew used to living under bureaucratic threat over many decades, as satellites of the Soviet Union, places like Bratislava, capital of Slovakia.   The new Prime Minister, who is refusing to join in the Greek bail-out, is another fine example, adding to the spirit shown recently by Hungary which rejected intereference by the EU and the IMF in running its internal affairs.

Slovak PM Radicova said “When democratically elected politicians raise criticisms they have the right to do so. But European administrators do not have this right, not under any circumstances.”

FAZ and Die Welt feature interviews with Slovak Prime Minister Iveta Radicová discussing the Greek bailout package. Radicová is quoted in Die Welt saying, “we show solidarity and take on responsibility…but we don’t want people who acted irresponsibly to get money.” When commenting on EU Commissioner for Economic and Monetary Affairs Ollie Rehn’s public criticism for not taking part in the bailout she says: “the way in which [he], a non-elected official from Brussels, spoke about the freely elected members of the Slovakian parliament was insulting. I will demand an official apology for this from Brussels during my visit to Berlin“.

“Europe must not be constituted by a big brother and many satellites which have to obey the larger, more powerful and wealthier. We remember very well what it means to be a satellite…I don’t want to compare, I only want to highlight that democracy also means to listen to the arguments of those who may be very small but are aware of their responsibilities“, she says in FAZ.

She continues: “Talk that Slovakia is acting irresponsibly must stop. To say it in all clarity: When democratically elected politicians raise criticisms they have the right to do so. But European administrators do not have this right, not at any time“.

Now that’s fighting talk, which should be emulated by William Hague and David Cameron, as they nestle comfortably into their relationship with Brussels.  What are they doing to stop the three Britons being draggged  off daily to rot in European jails, usually for no less than minor tarffic offences?  These are economic and political hostages being taken.  Radicova would not tolerate such things, I have no doubt.

Has Europe recently acquired a new Thatcher?  Let’s hope.  Why does it always take a woman to stand up to a gang of bullying men?