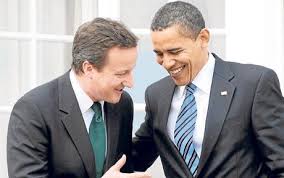 The meeting between Obama and Cameron went very well by all accounts.  Few details emerged other than the usual tripe about personalities.  Before the meeting, Obama had been hamming it up to a ludicrous extent, propagating anti-British attitudes, using the BP spill to create anti-British oilspin.

Yet a week or two later, and anti-Britishness seems to be taking a back seat Stateside, and a few of the details of what must have taken place are spilling out..

Somehow or other Obama has agreed that Britain can withdraw from Sanguin Province in Afghanistan, where the worst casualties occur.   And the Pentagon hacker has been assisted to some extent.

Since the Obama meeting, interestingly, Cameron has struck out on an extraordinary world tour taking in India and Turkey, where he has made statements that have puzzled the MSM completely.  Why would Cameron suddenly be talking up Turkey’s chances of entering the EU, when everyone knows they don;t stand a cat in hell’s chance?  Why would he attacking Pakistan and her involvement in Afghanistan, and siding with Hamas against Israel over Gaza?  The explanations provided by Melanie Philips and others betray only their  prejudices and show no perception.
Things are no doubt much simpler.

For a start, Cameron is merely mirroring Obama.  Obama had visited India and talked up a new era of Indian-American cooperation, replacing the Russian/Soviet alliance.  Obama had talked of taking on Pakistan and her influence in Afghanistan.  Obama had talked down the Israeli position over her disputes with Palestinians and others.  Cameron has merely replicated Obama’s positions on all these points, to the letter.

But whereas Pakistan, depending on US dollars, merely keeps quiet when Obama attacks their involvement in Afghanistan, when Cameron tunes in, Pakistan hits back.  Why should they worry about insulting Britain?

A conversation can start.

Cameron, in effect, is providing a channel for negotiation between Pakistan and America, which could be a very useful trade for Obama.
This is not the same as Bush’s and Blair’s relationship.  Blair assented to any demands that Bush made on him, even joining in his wars, without demanding anything for Britain in return, only for himself.

Cameron has at least achieved a withdrawal of British troops from the worst part of Helmand, within months.  No doubt other trade-offs were mentioned in the recent Obama-Cameron meet-up.

For example, it would not be surprising if after another week or two, when the oil has settled in the Gulf of Mexico, that BP found the price being exacted for compensating distressed locals, became a little easier, and that, despite the threats, BP was not evicted from the Gulf by all-American companies using the courts.

Obama used BP to twist Cameron’s arm up his back, and to put maximum pressure on him.  But Cameron has come home with something that pleases the President, it seems.

What that something is, will become clearer as the weeks move by.   But somehow, we already know that BP will find things a bit easier in the next phase of the international power game.  Cameron’s showing that he can deliver high value for Obama.

UPDATE – Within a week from writing, it appears that the BP forecast was correct.  The share price is drifting back up.  Obama has declared the crisis over.