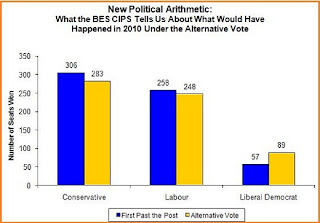 Hat Tip – Mike Smithson of Political Betting
This chart was posted two days ago on PB, and it shows how the recent election result would have been had it taken place under an AV system.  Add Labour to Lib Dem, and there would have been a clear Parliamentary majority for a LibLab coalition with 337 seats between them.
It is quite clear that had this been the result the Lib Dems, who had a clear offer of an AV voting system on the table from Labour, would have signed up with Gordon Brown, who would have stayed on as Prime Minister another five years.
Luckily for Britain, we still have FPTP and Lib and Lab only had 317 seats leaving them short of the vital 326 needed.
Look too at the Australian election result where a non-result has just occurred leaving the country rudderless.  AV  is a bloody useless electoral system which stops the majority from deciding who should run countries.  In Australia AV is now allowing a Mr Total Nonentity, an Independent from Western Australia with no great thoughts other than how much money he can negotiate from the next government, in a position to decide who will run the country
AV gives not an alternative vote, but  creates an Authority Vacuum, the worst thing in a time of financial crisis.
In Britain’s case, thank god we got rid of Gordon Brown.
Now let’s get rid of AV, before it stuffs us like it has stuffed Australia.
Australian AV – a picture of instability.
The Liberal-held Dunkley and Boothby now seem safe. Brisbane falls to the Liberals, and former Greens candidate Andrew Wilkie edges ahead again in Denison.

Likely result: Coalition 73, Labor 72, Labor-leaning independent 1, Greens 1, ex-Nationals independents 3.
Now it seems that the ex-Nationals independents really have little excuse not to back Abbott, if stability is really what they want (and if the seats stay as I’ve called them).
Backing Abbott would give the Government a majority of two. Backing Labor a likely majority of four, but dependent on an unlikely mix of rural conservatives, a Greens extremist, an ex-Greens independent and a warring Labor.
(Figures corrected.)
UPDATE
Then again, how safe is Brisbane for the Liberals?


http://online.wsj.com/article/SB10001424052748703618504575460734165909128.html?mod=WSJEUROPE_hpp_MIDDLESecondStories
The Tap Blog is a collective of like-minded researchers and writers who’ve joined forces to distribute information and voice opinions avoided by the world’s media.