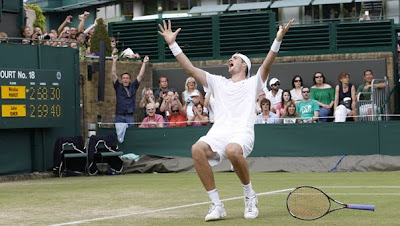 John Isner after defeating Nicolas Mahut in tennis’ longest ever match. There were over 200 aces.
Tennis, like football, is in trouble. Football needs an appeals system, whereby team captains can instantly challenge disallowed/allowed goals, with a TV replay made instantly on a large screen, and the referee and the crowd to be given a chance to make the same review that TV audiences and commentators can. It simply has to be done, or the game will descend into farce, where audiences instantly know the judgements made were wrong.

Tennis has fixed the equivalent problem with its use of Hawkeye now a well-bedded in feature of the game. Tennis has a different problem. It’s the endemic high number of aces, and the resulting lack of rallies.

This could be easily solved, by reducing the size of the service box. The central line could become two lines, a foot or even two feet apart. Job done.

Williams continued to fire aces in the final, which helped in the first set, when she did not exactly look sharp early. Leading by 4-3, Williams secured her third break point with a nifty backhand topspin lob. She won the game with a running forehand down the line. She won the set with an overhead smash, set up, like an assist in basketball, by that serve again. The match ended soon after.

It sounds boring. It was boring.

When tennis is won by the same players over and over again, depending on big serves, it’s time to change the odds away from raw serving power, and back towards a more varied game. An ace used to be a rarity before modern rackets came along. It’s time to fit the court to the equipment that’s now available, and make the game more interesting. There are far too many aces now. By narrowing the service box, you wouldn’t ever find a fifth set going to 70-68 as in the Isner/Mahut game. The same players might well win, but the crowd would also win. In tennis, as in football, those who pay the piper, should call the tune.

2 Responses to “Too Many Aces? Reduce Size Service Box.”