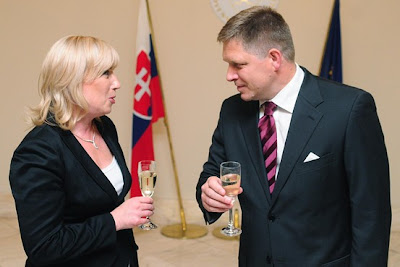 Slovak Prime Minister Iveta Radicova and her coalition partner
Slovakia’s new Prime Minister is in Brussels today, and has told Herman Van Rompuy, the President of the Commission, that she and her colleagues don’t want to be part of the Euro bail-out fund.

She says that the final decision will be taken by her and her coalition partners in Bratislava. The EU’s bail-out needs unanimity of the eurozone’s membership or it will have no legal basis.

“The position of our minister of finance and also my personal and our political party [position] is as it was before, that we really do not agree,” Ms. Radicova said when asked about her view of the Slovak contribution to aid for Greece.

I don’t think I misunderstand her words. But the EU is claiming in their public reponse that the Slovak position is not clear yet.

It sounds clear enough to me, Herman. This is a woman you are dealing with.