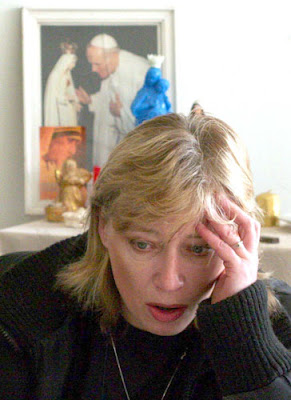 Iveta Radicova, Slovakia’s new right wing Prime Minister, elected a month ago, but who only took over as Prime Minister yesterday 9th July, is not happy about Slovakia being asked to bail out Greece and other Eurozone countries
The EU bail-out sums have to come from somewhere. Each eurozone country has been asked to come up with a set figure, from the biggest to the smallest. The smallest country involved is Slovakia which only joined the Euro just over a year ago, and must be kicking herself for doing so.

Prices rocketed up as Slovakia abandoned the Slovak Crown, and growth slumped 5.5% last year as she lost competitiveness in export markets. And then came the bail-outs to stop Greece and others from disintegrating.

The left wing Slovak government that signed Slovakia into the Euro, run by Robert Fico, the last Prime Minister, lost the June elections. A coalition of right wing parties were swept in, led by a new leader, Ms Radicova (another example of the tendency of nations to elect women at times of economic hardship), but she only took over yesterday. On day one, she has sent people reeling across the financial and political world, as Slovakia is now threatening to pull out of the eurozone bail-out.

From the WSJ – Ms. Radicova leads a coalition of center-right parties that won parliamentary elections in June. The parties campaigned with pledges to cut government spending and oppose big-ticket, euro-zone bailout projects.

Slovakia, a poor country of 500,000 people has been asked to raise $1 billion, or around $8000 per household in the new eurozone bail-out. She already paid out Euro 700 million for the first Greek bail-out.

The problem for the EU is that the new bail-out package is outside the terms of the Treaties, and has to be agreed unanimously by all EU members. Slovakia will, in effect, be refusing to take part, either partially or fully. This will delay the new and larger bail-out package, that is thought to be needed to help indebted Eurozone countries survive, especially Greece, but also Spain, Portugal and maybe others yet to come.

The political will to take part in the bail-out is being seriously challenged in Germany also. But Slovakia is now the first country to actually say No to it publicly.

Slovakia, the euro zone’s newest and poorest country, has balked at plans for a €750 billion ($951.9 billion) bailout package for troubled members, delaying the start of the rescue plan.

Amadeu Altafaj Tardio, the European Commission spokesman for economic and monetary affairs, said the commission is hopeful “Slovakia will honor its commitment and contribute.”

Mr. Altafaj Tardio said the European Financial Stability Facility, which was supposed to become active July 1, has so far been on hold, awaiting Slovakia’s approval. “It is our understanding that signing by all member states of the euro area is necessary for the facility to become operational,” he said.

Analysts said the absence of unanimous support by the entire euro zone could send a bad signal to financial markets, calling into question the grouping’s commitment to mutual support.

Bratislava is supposed to contribute €4.4 billion to the stabilization facility, backed by euro-zone member states. The fund is meant to be available to countries in the euro block with debt troubles.

Last week, Ms. Radicova said she didn’t want to block the start of the planned facility but said Slovakia wants further talks on its participation in the fund, as well as its overall size and other details.

The facility was created after the €110 billion bailout package for Greece stoked fears that other European countries could face similar crises. Slovakia’s €700 million contribution to the Greek bailout was approved by the country’s previous left-leaning government.

Euro-zone leaders, in an early May meeting dominated by French President Nicholas Sarkozy and German Chancellor Angela Merkel, agreed to the European facility and pledged support. The Slovak prime minister at the time gave his assent but said final approval would be up to the next government.

Basically she wants out of the bail-out, and looking enviously at the Czech Republic next door which has become far more competitive by staying out of the Euro, Ms Radicova would probably like out of the Euro as well.

It might only be a little crack, but, in the current uncertainty, a small crack is all it might take to bring the Euro crashing down. Uncertainty hangs heavy, as Trichet, head of the ECB, tries to make it sound as if everything’s all sorted in Euroland. Quite clearly, it isn’t. And it takes a newly elected 53-year old housewife in a tiny country to say so.

BBC – On Friday Ms Radicova pledged to do everything necessary to provide a “great government, not only a good one”.

“We are fully aware of the fact the Slovakia, like many other states, still faces the impact of a deep economic crisis, that Slovakia has a huge problem with its jobless rate, with the high level of corruption,” she was quoted as saying. 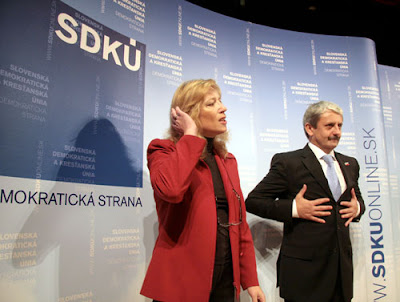 On her way to power,campaigning in 2006

THE INCOMING Slovak government has been voicing unease about the €750 billion rescue net for distressed euro zone countries, prompting alarm in Brussels that it could undermine or derail the risky plan.

Doubt over Bratislava’s participation in the scheme threatens to delay its formal establishment, because signatures from each of the 16 euro zone finance ministers are needed before work can be set in train.

Even though designated prime minister Iveta Radicova softened the line yesterday by saying her centre-right party did not want to block the EU/IMF deal, she failed to make it clear when or if her incoming government would sign up.

Her ambivalence was in keeping with the tone of a debate that has thrown Slovakia’s participation into uncertainty after parties opposed to aid for Greece prevailed in elections last month.

With ministers from the 15 other euro zone countries expected to join the scheme within the next fortnight, Ms Radicova is coming under mounting pressure from Brussels to participate.

Will she be stitched up? Or will she stand firm? Somehow I doubt she’ll back down that easily, but we’ll see.

(her name is pronounced raditsova btw (c = ts in Slovak))