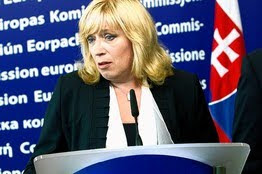 Slovak PM Radicova at the EU COmmission yesterday
The headlines declare that Slovakia has removed her objections to the launch of the Euro bail-out fund on July 1st. In truth, this is not the case. The detailed reports say that Slovakia, and all other 16 Eurozone nations would have to individually agree all actions of the bail-out fund. In other words, the real decisions are not taken yet.

WSJ – With Slovakia’s approval, the EFSF can now begin operations. But any loan to be provided by the facility would also need to be agreed to by all 16 euro-zone countries, which would also have to sign off on terms and conditions of any assistance, according to the European Commission, the E.U.’s executive arm.

Still, in a crisis, Slovakia or any other state objecting to a rescue effort would face serious pressure from the currency bloc’s larger members not to stand in the way.

Bratislava said European Union rules need to be changed to set up a mechanism for forcing euro-zone countries that have “consistently carried out irresponsible fiscal policy” into insolvency in an orderly manner.

Germany has in the past proposed similar measures for insolvent states to be included in an updated set of governance rules for the euro zone. But at a meeting this week of EU finance ministers, German Finance Minister Wolfgang Schäuble said there was little support for such a move.

Slovakia also said any country seeking to borrow bailout funds should have to prove it has exhausted every alternative means of raising money and should have to agree to strict repayment terms set in conjunction with the IMF.

In other words, Slovakia has not agreed to support any bail-outs yet.

How, for example, can a country prove it has exhausted all other borrowing alternatives? This is a decision deferred, not a decision taken.

The final decision will be political, and much too will depend on the markets. If prices are crashing, and government revenues are falling hard, it is not likely that countries like Slovakia will agree to bailing out other countries.

By allowing the EU to claim unanimity between the 16 eurozone countries, it helps keep a crash from happening for now. That is all this is about. How long can the evil day be postponed. When the real decisions come, events will be in a far worse state than they appear now, with Eurozone countries in default or near default and asset prices collapsing across the continent. Then the real decision will be taken. There is already more than a hint that Slovakia will propose insolvency and default in such a case for the country concerned. But for now the EU gets its reassuring headline.

Open Europe – Slovakian Finance Minister Ivan Miklos made clear that his country “will give its approval to the actual launch of the mechanism only if the EU remarkably strengthens the Stability and Growth Pact”. In addition, Prime Minister Iveta Radicova said that Slovakia will not contribute to the joint EU/IMF €110 billion bailout package for Greece, since “the Greek loan is about irresponsible government policies, irresponsible behaviour of the banking sector”.

In general Slovakia supports bail-outs but not in any particular case!

WSJ – Germany’s lonely fight to limit potential liabilities of the EFSF emergency funding facility by allowing governments to default and then restructure their debt just got a new ally.

Slovakia, which accounts for 1% of the EFSF money , isn’t going to sink the deal. But it does add an independent voice emerging from among the EU’s newer members in the former East Bloc. The Slovak cabinet issued the view despite efforts by EU heavyweights to strong-arm Slovakia’s new prime minister, Iveta Radicova, into compliance in Brussels this week.

Pundits can’t be blamed for doubting that Slovakia’s stance is unlikely to tip the scales in Germany’s favor. Even the ECB opposed a bankruptcy provision, fearing the national bankruptcies could do more harm than good to the euro franchise.

The Euro fantasy lives on, for now.