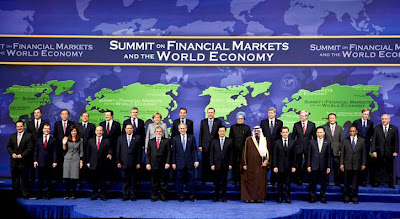 PICTURE – an earlier G20 when they were less camera shy and keen to claim the credit for economic events. Now they don’t want to be seen anywhere near things economic.
The signs are all there. The IMF just over a week ago suggested that European countries launch a programme of Quantitative Easing, while putting all its main banks through a stress test which would ensure they were funded sufficiently to survive (at least a few more months). In two weeks time, all being well, the eurozone will launch its fund for propping up sagging eurozone countries, demanding delivery of the sums promised by its members. America is lending dollars against euros, with the same guaranteed rate of swapback, but receiving no interest, so that Europe is, in effect, being given life support from America

Greece successfully sold a small roll-over of government bonds, to boost confidence, this week, but they were dated short, and were of small value. The big hurdle is yet to come.

The next day after the IMF announcement the west’s stockmarkets took off on the fastest one week rise in stock market history, 10% in 6 days without a correction in sight. Now companies are reporting a previously-flagged 27% increase in earnings, coupled with ludicrously optimistic forecasts, all designed to ram stockmarkets into a crazed bull run. What happened to the real world?

It is all so obvious, you would expect to find a financial headline somewhere explaining that the whole thing is choreographed. These moves have been planned a while ago, and the details were no doubt finally agreed at the recent G20, but make no mistake. This is Europe’s and The OWG’s (unannounced) financial D Day – their one last desperate roll of the dice to stop the Euro disintegrating.

It must be the biggest financial rescue operation in history. It depends for its success on the crowd falling for it, and not realising what they are up to. Hence the secrecy. By the time the word works out what the game is, they hope to have secured their primary objectives, at least for the next few months. People have to believe it’s true for it to work.

The world’s financial system is in lockstep, with nearly all shares moving in line with their index, and the indices with each other. Currencies are trading in the opposite direction to the way they went in the flash crash in April, mostly against the US $, which has risen 20% against the Euro in 7 months, and would probably still be rising, were it not for these interventions.

This QE unlike the first launched in November 2008 post-Lehmans, is unannounced and is being fired on a vast international scale. The objective is to put the world into such a state of temporary optimism that the debts of Greece can be tidied up on the trot, along with those of any others looking hopelessly unable to get out of slump. The Euro will be kept flying upwards until the day comes when the funds are in place, which is meant to be in two weeks time, and the operation will for now be complete.

The world’s banking system must have issued trillions to governments in secret to fund all this. We know that various European governments have lodged 350 tons of gold recently with the Bank Of International Settlements in Switzerland to borrow against, so they’ve loaded up to the hilt all ready for this. And now at the beginning of the holiday season while volumes of trade are low, the monies are being subtly released to achieve their desired ends.

Commodities have not been targeted to rise much, it seems. The main effort so far is to boost flagging stock markets and currencies. The $ is falling, and the Euro rising. The herd is falling into line. It’s the reverse of the Wall Street Crash. This is the OWG Wall Street Uncrash, sending prices screaming up in a frenzied, seemingly unstoppable rally. It’s all to save the Euro, if they can, and Obama’s stumbling political reputation to boot.

I guess it will all work for a while. But one day the herd will wise up when they do this kind of thing, and not immediately get suckered into running the way they are herding all of us.

Even worse than that, the world will become a QE-dependent junkie, unable to create bull market confidence without state and other interventions. Like former workers who learn to live on social hand-outs and stop making any efforts to help themselves, all ‘traders’ will become robotically controlled by financial bureaucratic edict. There will be no markets, only state-permitted and ordained prices, which are not allowed to set themselves according to natural supply and demand. The final crash can only get bigger, and more devastating than the smaller one we are not being permitted to have now. The end of the Soviet Union, but on a worldwide scale, is a good model for what is being created, where a permanent financial nuclear winter will pervade. After The Bomb will not be a physical detonation, but a financial implosion, when the final thrust of QE has spent every last penny of credit the world can raise.

It ain’t worth it. Markets are saying that the end of the Euro will be a blessed relief for the the countries that are locked within it. In an age of computers, credit cards and instant global communication, a single currency has precious few advantages anyway. It’s a Soviet era aspiration, well out of its time. The only question is how much will it cost to get rid of it. The way the world’d leaders are going, the answer to that question is going to be far too much, and far more than it need have been, from all angles of the account.

Bilderberg. It’s a name that strikes fear into your heart. You can almost imagine Count Bilderberg, with his monocle, and his white cat, scheming with his minions how to implement the New World Order. You can see them clearly, lounging in well-upholstered armchairs, smoking cigars and sipping whisky, as they listen to a seminar on How To Utterly Crush And Enslave The British People, before heading out onto the wide patio overlooking the sea for a bite of tapas prior to attending the lecture on How To Bankrupt The World And Gain Absolute Mastery Over Everybody In It.

It’s a good read. There’s many a true word written in jest.

FINALLY – this from Martin Wolf of the FT.

Historically, countries that have suffered debt crises have almost always been helped by a collapse of the exchange rate (see chart). Peripheral eurozone members do the bulk of their trade with one another. So the modest decline in the external value of the euro is little help. Inside the currency union, the way out is through falling prices (more precisely, falling costs). Ireland is on the way; others are far behind (see chart). But this is a drawn-out process and, not least, also raises the real value of debt.

Is it all really worth it? Surely default and return to own currency would be a lot cheaper way to solve the Euro’s problems. The loss of prestige is not worth losing all our money over. It’s better to admit the world made a mistake, put it right and move on. One more German election, and this could yet happen. Meanwhile Angela Merkel, supported by Obama in her efforts, is becoming the most expensive woman in history. To her the Euro is religion, and any amount of money can be thrown after saving it.

In the WSJ, the head of the Euro bail-out fund, Klaus Regling, grandly lets it drop that the markets are recovering (surprise, surprise!), and the bail-out fund’s money is unlikely to be needed anyway. What he doesn’t tell you is that it’s other bail-out money, which is temporarily boosting the markets, not some bit of good luck which has fallen the Euro’s way. 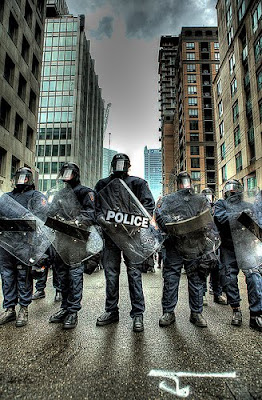