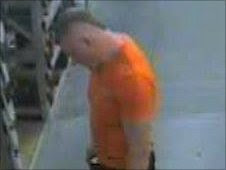 In the search for murderer Raoul Moat, the Police are having little luck so far. The BBC says,

He (a Policeman) said: “These CCTV images show Moat in a Newcastle shop on Friday and are the most recent pictures we have of him.

“He looks different in these images compared to previous photographs, and in particular show his hairstyle, what he was wearing, and the fact he seems to have lost weight.

It’s all a bit odd. Are the Police sure it’s him? Perhaps he has enough connections to get him out of the area or overseas. Is he going to be the next Lord Lucan? He’s obviously no reason to stay.

£10,000 reward. The Police are saying they want to apprehend him ‘safely’.

The search for Moat is continuing around the village of Rothbury. Sim said the terrain was challenging. “This is a beautiful part of Northumbria but it is extremely difficult to search. The area is full of hills, caves, ravines, dense woodland and deep water. This search will take time and we must protect those involved.”

Scotland Yard sent about 40 armed officers from its CO19 unit, including snipers armed with high-velocity rifles and telescopic sights.

Police have refused to confirm speculation that SAS officers have joined the search.

The Police Service of Northern Ireland has sent a fleet of armoured vehicles to offer protection to unarmed officers on patrol.

Police continue to check remote farmhouses and outbuildings for signs of Moat, who abandoned a tent and other equipment earlier this week.

It reminds me of Delaney’s Donkey. ‘The Police and Auxiliary, the garrisoned Artillery, the 2nd Eniskillens and the Lifeguards too…”. I know it’s no laughing matter, but they seem to miss all the easy leads that they had early one, and now they’re getting the whole army out there. I just wonder if he’s still around, or he’s gone.

If it had all started with a bank robbery, and millions being lifted, I would understand. But in essence this was a domestic.

as far as he could see, the police were never going to leave him alone.
“There was a period over four or five months when his car was stopped 100 times. If his tax disc was a day out of date they’d be straight on to him.
“On another occasion he’d been gardening for an old lady and she asked him to take a couple of bits of metal to the dump for her which of course he said he would.
“Just down the road, the police stopped him and asked him if he was insured to carry scrap. He said it wasn’t scrap, it was waste that he was taking to the dump as a favour but they called his insurance company and impounded the truck. He then had to pay £220 to get it back.
“On its own, that’s just a small incident. But there were so many others and they just built up and built up in his head. I can’t put into words just how much he hates coppers.”
When Samantha made up the story that she was dating a policeman, Anthony says it tipped Moat over the edge. He said:
“That was the final straw. I don’t know why Sam told him that because she would have known that would wind him up.
“Raoul is loyal to his friends and would do anything for anyone. But he’s got a temper on him and hearing that from Sam together with everything else just made him crack.
“I’m not making excuses for what he’s done, but this isn’t the Raoul I know. I don’t know where he’s got the gun from. In all the years
“I’ve known him, I’ve definitely never seen him with one.” Anthony reckons it is inevitable Moat will be gunned down in a shoot-out with armed officers.
And he doesn’t believe he will be moved by the Northumbria force’s appeals to turn himself in.
He said: “They’re telling him he still has a future and to think of his children. Raoul’s not thick. He knows he hasn’t got a future now and won’t see his kids again. It’s too late for that.
“But I think he’ll be scared now. He’ll have thought about going down in a blaze of glory but as the days go by, the adrenalin will have worn off and the anger will have died down.”
Anthony also believes Moat may be out of ammunition. He reckons the two shots he claimed to have left may have been used up when he later shot and seriously wounded PC David Rathband as he sat in his patrol car.
He said: “That would explain why he’s gone quiet in the last few days.”
Now he fears Moat will goad police into a showdown despite not being able to fire back.
He said: I’ve got a feeling he’ll run at them knowing his gun isn’t loaded and they’ll be forced to kill him.”
Anthony added: “I just wish he’d spoken to me about how he was feeling and I could have tried to stop this happening. But I didn’t have a clue what was going on in his head.”