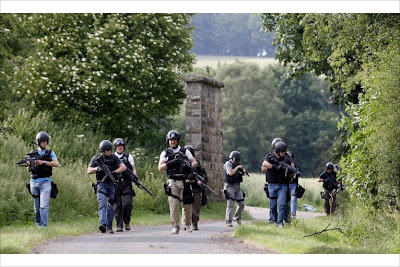 Moat, 37, was tracked down to Riverside in Rothbury, where eyewitnesses said police negotiators are talking to him as he sits on the ground cradling his shotgun.
Police snipers have surrounded Moat, who surfaced near allotments where a man fitting his description was seen on Thursday night.

Chief Superintendent Mark Dennett, the area commander, issued an urgent warning at 7.37pm for residents to stay indoors for their own safety.

Ten minutes before this kicked off, around the bend, I looked to the left, I saw police snipers pointing towards that direction. We continued down here and a couple of seconds later, the police came down the street and one crashed into another. And it was mayhem, basically.”

Anyone else reminded of Harry Roberts? He evaded Britain’s finest for 3 months whilst taking his meals in a cafe next door to the police station.

I am glad that Cameron did not win outright. Joe Public is much more likey to go along with the cuts, with the Lib/Dems on board, than without them.

165
Must be their fear of the European Human Rights Act.

The Daily Mail surpasses itself:

”Expert negotiators were rushed to the scene in Rothbury, Northumberland, in an attempt to stop Raoul Moat killing himself”

Gazza is at the scene, and no, I’m not kidding. Says he knew Raoul Moat.