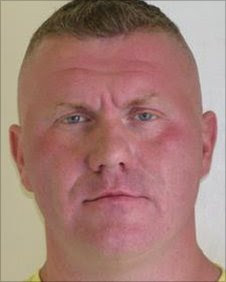 Why rile him by taking his kids? It’s made a bad situation a helluva lot worse.
Another two weeks goes by and another gunman is on the loose rampaging around the North of England. The first gunman seemed like the perennial loser who had failed in life at every turn until he could not bear any further humiliation. His troubles were financial at root, and he was clearly in debt.

The second murderer on the loose seems to be of a different variety. I was struck by a comment of his former neighbour, who described how the Police had come and taken away his children into care.

She said that she is not surprised he shot a policeman. That was a very surprising thing to hear in a television interview.

She said he was a helpful neighbour and cheerful, although prone to paranoia i.e. not the typical loner, who gets into gun fantasies.

He was in prison serving a short sentence for assault, no doubt associated with the removal of his children.

There seems a lot more to come out about this case. The Police had removed his children. This was presumably under a court order. That would no doubt be an order of a Family Court, for which no reporting is permitted.

If the removal of Moat’s children was an injustice by the Court, under current rules we will not be allowed to know, but the neighbour appeared to believe that it possibly had been.

Murder is clearly not the right way to go about rectifying an injustice, but in desperation, you can see how an individual, forbidden to take any further part in his childrens’ lives could decide that he had nothing further to lose, and, knowing no other way to fight back, killing those who had deprived him of his kids would, to some individuals, seem the natural response.

I have no idea if Moat is an ogre (today’s newspapers suggest that he was a violent bully), or a man driven by injustice to extremes. We don’t know whether he has a history of violence. But I think it is wrong that the State is allowed to carry out the ultimate humiliation, usually of fathers, who are told to go away, stop seeing their children and not even to speak about their loss. It is asking for trouble, in my opinion.

After thirteen years of Blair and Brown, The State is not only ludicrously expensive to run. It has taken too many powers unto itself, depriving citizens of basic rights. Family Courts should not be allowed to sit in secret, and parents should be allowed to have a public airing of their cases. Justice should not only be done. It should be seen to be done. But somehow this long-established principle of the Common Law has been removed in the case of Family Courts.

The BBC is keen to present Moat as an out and out evil person, which he might well be. But was driving this man to total desperation the right thing to have done? As I say, we need to know the facts of the case to form a judgement. I doubt very much we will be given the chance. The State will not permit it.
The BBC.

Listen carefully to Blair explaining his philosophy of intervening in families. You might think it’s a spoof. It is so appalling to listen to. He thought he was God, and now real people are responding as they see fit to these gross interferences by the State. Listen to Brian Gerrish below who knows of cases where parents have lost their children to the State under bizarre circumstances.

Raoul Moat was clearly no angel, but was he that bad as a father? How can we know? There are many Raoul Moats around, unfortunately, but why does the State get involved in trying to undo the relationships they are involved in?

Brain Gerrish – Child Stealing By The State. Was Moat the victim of a campaign of political correctness run mad? We will never be allowed to know. From the point of view of the Police, they are put in an impossible position by Court Secrecy. It has to be brought to an end, for everyone’s sake.

Blair’s theory that evil children inevitably come from evil parents is not correct. Life is not so simple. It is always a wonder to see how the best people often come from the worst of families. They’ve seen how stupid it is to live like their parents do, and go a different path. God that man is sinister, and ordinary Policemen are now becoming the victims of his folly, caught up in cases like Moat’s, just as were the soldiers in Iraq. If The State has declared war on families, it should not be surprised if the occasional one fights back.

In the document, which was also handed to The Sun newspaper, Moat said: “Last night I called 999 and declared war on Northumbria Police before shooting an officer on the West End A69 roundabout in his T5.

“Rang again and told them they’re gonna pay for what they’ve done to me and Sam.

In his own words –

Last night I called 999 and declared war on Northumbria Police before shooting an officer on the West End A69 roundabout in his T5. Sitting there waiting to bully someone. Probably a single mum who couldn’t afford her car tax.

“Rang again and told them they’re gonna pay for what they’ve done to me and Sam. I went straight but they couldn’t let it go. The public need not fear me but the police should as I won’t stop till I’m dead.”

“They took it all from me, kids, freedom, house, then Sam and Chanel [their daughter]. Where could I go from there? Obviously I have issues but I was pushed. I never beat my kids. I could simply admit to anything now cos it doesn’t matter. I’m a killer and a maniac but I ain’t no coward.

Note that he mentions the taking of his kids as his reason for taking revenge. Was that the right decision in retrospect?

FROM HIS GIRLFRIEND’s FATHER –

Miss Stobbart’s father, Paul, appealed to the former nightclub bouncer to hand himself in to police.

He said: “What sort of legacy is this for your daughter?

“You know I won’t lie if she asks about her dad, how good a dad you have been and how bad it has turned out.”

THOUGHT – Macchiavelli in The Prince advises against interfering with your allies’ women and families, if you want them to stay as your allies. Men, in primitive terms, care less about money and about things, than their women and their children. In other words, mess with someone’s business and money, by raising taxes on them, and you will get away with it. But if you mess with their women or kids, the result is the creation of enemies. Blair’s doctrine of removing children from parents in greater and greater numbers will break the loyalty of citizens to the state. It’s time it was stopped.

Local authorities are offered large bonus payments for removing the targeted number of kids from their parents. It’s wrong.

UPDATE – The BBC is trying to blame the taking of steroids for his aggression. I don’t agree.

A letter purporting to be from Raoul Moat, published by The Sun newspaper, said: “It’s like the Hulk, it takes over and it’s more than anger and it happens only when I’m hurt.”

But it also said: “Obviously I have issues but I was pushed. I never beat my kids. I could simply admit to anything now cos it doesn’t matter.”

I can relate to experiencing terrifying anger. It happens very rarely in my life, but when it happens, it frightens me how powerful those emotions are. I resort to fighting back with words as my best weapon. Others will not have that option, and will resort to violence. The point I am making is why drive people to breaking point, anyway? What good does it do?

The Coalition needs to cancel the targeting of the number of kids to be taken away from parents by Local Authorities. Taking kids should be greatly reduced, and only done as a very last resort. There are 25,000 children a year taken from their parents by the state, in secret, to meet government targets, which trigger sizeable bonus payments.

The people who took Moat’s kids, were probably trying to hit Blair’s targets. It has to be stopped.

We have to learn from what’s happened.

A tired and emotional Gazza talks on radio, saying he knew Raoul Moat, and that he was ‘a gentleman, a lovely bloke. I know he’s a good lad.’

If it wasn’t so tragic and hopeless, it would be funny. In amongst the nonsense Gazza talks, he quite obviously likes Raoul Moat. Sad.

Kilobar says:
July 10, 2010 at 2:15 pm
It is being said in Newcastle that the one Moat killed is a cop. Sky have also reported this earlier today. So if it turns out Moat killed the one who fitted him up then put his kids in care to go round and kop for his bird then Moat will be the biggest hero in the world.

Former police firearms adviser Andy Redhead said: “All the officers involved in this operation are relieved that it’s over.

“And I dare say there is also an element of disappointment that Mr Moat was not persuaded to put the weapon down and surrender.

It’s nice to hear that regret expressed by Andy Redhead. All those whooping it up that Moat is dead might pause to think that a father is finally lost to three children today. I don’t like reading celebratory posts as on Roger Helmer’s blog. He should be ashamed of writing such stuff.

It doesn’t undo the previous shootings, to have Moat dead. He had given up hope long ago of being allowed to be a father. He preferred to die, it seems. The State has it just as it wanted. Surely they should never have forcibly removed Moat’s kids in the first place. Tony Blair would disagree with me. In this as in so many other things he did, Blair is wrong.

Meanwhile Metropolitan Police Commissioner Sir Paul Stephenson has criticised tributes which have been paid to Moat.

Flowers and cards have been left at the scene of Moat’s death and outside his home in Fenham, Newcastle, while almost 17,000 people have joined a Facebook group called RIP Raoul Moat You Legend.

One of the cards in Fenham read: “A good mate, a good dad, good at school, well-mannered, hard-working businessman. That’s the real Raoul Moat.”

Why is it disappointing that Raoul was not a bad father? Maybe the Police should look into this case more deeply, and find that a good man was driven over the edge. That is not being thought about at all, judging by the comments of Sir Paul Stephenson.

The Guardian is not so sure that there was much effort made to take Moat alive. The State hardly wanted him talking about his side of the story.