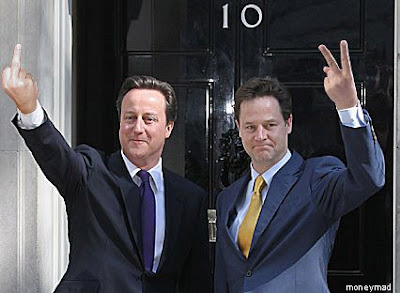 Recent opinion polling shows a decline in support for the Lib Dems to around 15/17% from near 24% pre-election. Many commentators see the situation as terminal for the Lib Dems, and the coalition as a mistake for Nick Clegg. I don’t agree.

There is bound to be a Lib Dem desertion by a few as of recent events. The pleasing thing for LDs, though, is that it’s a small number relatively speaking.

The recent trend is however, no guide to the future.

If Conservative and Lib Dem form an effective electoral pact, for example, Lib Dem MPs in constituencies where Labour lie second, could benefit from Conservative votes and consolidate their positions. Other seats could come into range on the same basis. The loss of 25% Lib Dem voters would be more than made up for by a tactical vote by Conservatives.

The influence that LDs bring on a governing coalition could become popular if a key issue chrystallises their situation in the coalition in peoples’ minds as a good thing.

Clegg could easily become popular once people get over the initial shock of the coalition, if he is seen as being responsible for some judicious tax cutting, for example. My guess is that Lib Dems need to cotton on to tax cuts, and move away from their kneejerk tax increase mentality, and push the current Nick Clegg deregulation effort much harder, as well as favouring spending cuts.

Right now the public sector are fed up as they thought an LD vote protected their position. This is no doubt where many of the votes are being lost. But in five years time, many current Public Servants will be working in the private sector, and will have a different viewpoint.

The LDs can create a new Constituency if the party was seen to be liberating the population from hated over-regulation, which prevent teachers, police, nurses and businessmen from being able to do their jobs as they would like. Clegg is currently inviting people to name which regulations they would most like to see changed.

The problem will be as ever that the rules are substantially made in Brussels.

Until Clegg kicks the Brussels habit, he will be seen as a phoney. What are the chances that he will sound off a eurosceptic sentence within a month or two?