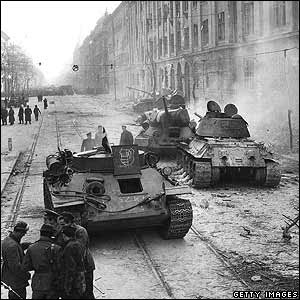 The 1956 Hungarian Uprising BBC
The idea of the world’s financial organisations is to create not economic health but dependency. The Third World has a number of HIPC (Highly Indebted Poor Countries) where the ruling class is supported in position by the CIA, where massive debts have been taken out to fund electrification or other mostly useless projects based on ludicrous estimates of economic growth, and the populations kept in check by deep poverty. This was found to be a great way to keep the Soviets out in earlier decades.

The same techniques are now being used to subjugate richer, and NIC countries. Install corrupt leaderships and allow the ruling class to enrich itself. Get the countries into massive debt. Bring in austerity programmes to subdue the peoples who otherwise aspire to greater political freedoms. Assassinate/eliminate any leaders who don’t want to play the game.

In this treacherous environment, leaders have to pretend to be cooperating. Cameron is treading carefully around Obama today, as he is brought under intense pressure to merge further into the EU, the subjugation medium of choice for Europe. Hungary dared to think independently and issue its own banking controls without waiting for an EU-wide programme, and as under earlier empires, is again being made to pay a price. They don’t send in the tanks any more. The banks and the markets carry out the subjugation nowadays. The Florint was dumped by 2.8% in a day. Hungary has many of its debts denominated in foreign currency, so dropping the currency is a painful event. The country’s debts keep Hungary on the leash.

Britain could be treated in a very similar way by international banks acting in a coordinated programme. Our debts make us very easy to bully into line. The IMF and the world’s banking cabal has Britain just where they want us.