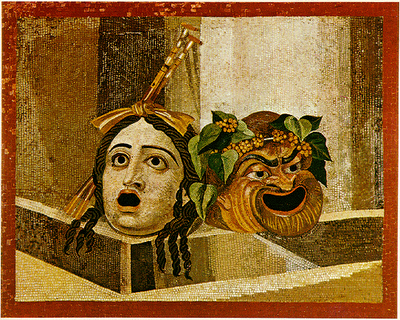 Greek drama, often as funny as it is tragic

Given the importance of Greece to the credibility of the Euro, it seems odd that there is nothing in the media to tell us how things are going over there, other than the occasional reports of riots, murders and mayhem. What’s it like living there, and what progress is being made with the promised spending cuts?

By chance we have friends from Greece visiting here today. They are Brits who live on the island of Naxos. Their comments about the economy are interesting. They say few are poor in Greece. Even the peasants have money. In Athens 50/60% work for the state, and have amazing perks. Many get extra months in salary tax-free! The most generous deals grant 16 months salary for 12 months work. We think Britain has a client state sector. The equivalent in Greece is far more developed.

The jobs are for life, with manual and computer systems operated by government departments to ensure maximum numbers of employees. They can retire and get a pension after 35 years of work in Greece, and people of 53 onwards, who started work at 18 are eligible to retire.

There is little discernible progress being made in axing this state-paid largesse, apparently. Middle class pensions are being cut by 10%, though not basic pensions. Petrol and cigarette prices have risen.

Greece is a cash economy with few receipts given, although petrol stations have recently begun issuing receipts which they never did before, for example. Those who have summer businesses claim unemployment benefit throughout the winter months, even if their businesses remain open!

Greeks don’t pay TV licenses, or any community charge. It seems that the government will have a long way to go to cut the deficit at this rate of progress.

Given all the above it is not surprising that markets are still not convinced by the Greek austerity programme, and the capability of the Greek government to live within its means.

The EU and the IMF are willing, with the aid of the USA’s dollar/euro swap agreement, to fund the deficits of the European sovereign debtor nations, on condition they engage in severe austerity programmes, driving down the living standards of their citizens. If the countries in financial plight are willing to cut, cut and cut, they will be funded, at least while the larger economic entities are able to raise the funds.

The only limits to this programme are political, in that if the austerity becomes politically destabilising, to the point that the countries involved, such as Greece cannot hold themselves together as democratic entities, or merely don’t cut enough or at all, then the gameplan will fail.

That’s assuming that the largesse coming from on high will not dry up. The two modes of failure are linked. If pumping money into insolvent countries to save the Euro is seen as starting to fail, then the conversion to a programme of defaults might become the preferable, or only way of dealing with the situation.

A large hint of how the current situation is playing out comes in this piece in the FT yesterday, not from what it says, but from what it dare not say.

Meanwhile, further uncertainty was triggered by the failure of a Hungarian government bond auction, following Budapest’s failure to agree a fiscal strategy with the European Union and the International Monetary Fund at the weekend. The poor demand for Hungarian paper contrasted with smoother auctions for Ireland, Greece and Spain, although there were still some concerns about yields.

but the fact that there is demand does diminish the risk of sovereign default in the euro area at least in the immediate future,” said Jane Foley at Forex.com.

I wonder how the default scenario would be playing out if there wasn’t a wall of money being thrown at it.

The yield spread between Irish and German 10-year bonds narrowed 7 basis points to 277bp, while the Spanish/German spread tightened 10bp to 160bp, the lowest for nearly two months.

The lack of a mention of Greece’s yields prompts one to imagine they can hardly be improving. I checked. It appears that despite all the bail-outs and the bottomless pit of money being made available, investors still fear a Greek default. With the first journalist being murdered in Athens for 20 years two days ago, there is naturally the fear that a political meltdown is Greece is a possibility.

A quick glance at Greek 10 year bond rates indicates why the FT cannot even bring themselves to quote what the Greek rates actually are in a printed article. Greece now has to borrow at 11.74%, which is almost back to where rates were before the bail-outs started (12.5%), and 875 basis points more than German rates. It is as good an indication of a coming meltdown as any other.

For two months the world hurls all its money to save the Greek Euro.

It makes not a blind bit of difference.

It’s so serious that news media cannot even bring themselves to quote the rate. That’s how bad it is.

Most Greeks don’t like the Euro, my friends tell me, and would not be unhappy to get the Drachma back. It seems like it’s only a question of time, given the Greek capacity to ignore authority of all kinds. Smoking, for example, has been banned in Greece four times. A fifth ban is being attempted in September. My friends note that the compulsory NO SMOKING signs have been placed by bars in the bottom of the ash trays! I wish Brits would be as good at ignoring government diktat, and just ploughing on as the Greeks. With the Greeks having the political culture that they do, the Greek Euro’s days are surely numbered. They’re just taking the piss.

THE EU LIVES ON IN CLOUDCUCKOOLAND (a term originally from ancient Greek drama!)

On his BBC blog, Robert Peston notes that “the European Union’s governments, central bankers and financial regulators are not prepared to admit the possibility that an EU government could actually default on its debts – even as part of the totally theoretical exercise of the stress tests.” This, he adds, reveals much about the EU’s attitudes to markets: “Now it’s all very well to argue that markets are frequently wrong. There’s plenty of evidence of market prices overshooting in boom years and undershooting in lean years. But it is something different altogether to say that when the price of Greek debt falls by a quarter, that can never betoken a possible default by the Greek government.”

Meanwhile, European Voice notes that markets are still not clear about important aspects of how the eurozone bailout fund will operate, particularly with regard to the kind of financial difficulties that could qualify a member state for support, and whether the facility can cope with an extreme situation in which a country fails to pay back its loans.

The EU are taking the piss as well, pretending things are not as they are, to avoid facing up to the situation. Iveta Radicova, the new Slovak Prime Minister is not so easily conned. See earlier posts for her story.