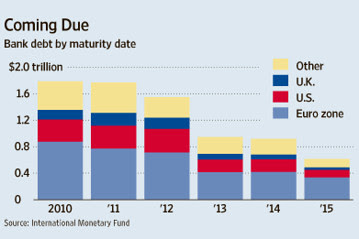 This WSJ chart shows how much Eurozone governments will need to borrow in the next three years, as they have to renew bonds which are reaching expiry dates. The UK and the US require far smaller sums to be renewed.

The problem will be with Greece for example, that the previous bonds were financed at rates around 3-4%. The current market for ten year money in Greece is rising and is currently back to the pre-bail-out level of nearly 11%. The country could experience a trebling of its debt servicing costs, starting as of now.

It is these statistics that tell you that the Greek and maybe other Euros are effectively beyond rescue. Portugal and Spain’s 10 Year borrowing rates are currently over 5%, and have been contained by the promise of a large bail-out. But the bail-out hasn’t happened yet, and already there are countries kicking up about having to pay it. Slovakia, Austria and Germany could at any time pull out for one reason or another.

There is unlikely to be the political will to drive the bail-out when the moment of payment comes, and even then the sums being promised are dwarfed by the scale of the problem. Only words are being expended to try to save the Euro. Words as we know are cheap. The borrowing required in the chart is purely to renew the current borrowing levels. Any new money required to boost flagging economies with infrastructure spending, for example, would be on top, or to temporarily fund collapsing tax revenues in a double dip recession.

The problem is also that you cannot gift creditworthiness. If the banks of the stricken countries are not trusted, or their governments, no amount of bail-out can help them, or change their situation. Lenders will disappear, or charge rates beyond reach. Default becomes inevitable. The ECB is pretending to implement banking stress tests, publishing the state of each bank’s finances and ensuring they are funded sufficiently, but in truth they dare not expose the real situation, if indeed they know it.

And that’s before you take on board that the countries being required to gift funds, also have debts and need for their own finance. The forces driving the Euro apart in the end are stronger than those trying to keep it together. We are all just waiting for the true position to declare itself one way or another.