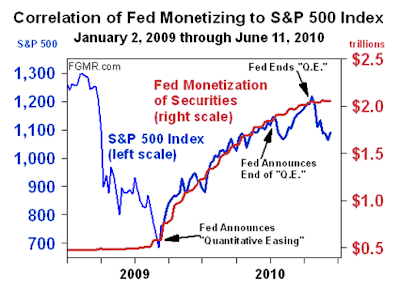 Just as the EU starts a campaign of QE to attempt to bail out the Euro, the US Fed and the UK stop their QE programmes, at least for a while. The world’s spare financial energy was being used to hold up optimism right up to the time of the British elections. Was that coincidence? If the QE was being used to try to keep europhile Labour in power, and Cameron out, as one of its objectives, it failed.

Now the world’s financial ‘energy’ feed is being directed onto another target, bailing out the PIIGS and trying to save the Euro. While QE was effective in turning around stock markets for a year, sending them on the fastest one year rise in their history, the story so far with saving countries from default is that QE is proving less than effective.

As the chart of Spanish government debt shows, there is little change in the speed at which lenders are demanding higher returns, despite Shock & Awe.

Outside the control of those who hope to use QE to achieve political outcomes, there is the fact that parts of the world economy are beyond the reach of the western central banks. China’s boom is slowing rapidly with the Shanghai, Hong Kong and Australian stock markets slowing noticeably.

The deflationary forces are simply too powerful. As people move away from debt, both offering it and taking it, cheap and plentiful money has less effect. Think of yourself. If someone had offered you an extra loan of £100,000 at %1 p.a. three years ago, you would have grabbed it with both hands. But today, you would pass it by, and wait and see. Am I right? Thought so!

I don’t mean a replacement loan.

Governments depend on your behaviour to make their lending achieve their ends, and no amount of money can ultimately change what people’s instincts tell them to do or not do. Deflation like inflation is in the collective mind. Gold is said to be the one thing that will keep rising forever, but the shortage is of cash, and gold needs cash to buy it. Banks who need cash keep bulling up gold, which they own. They would, wouldn’t they. But it’s cash they are all short of, and debt they are desperate to get rid of. The gold will end up getting sold soon enough.