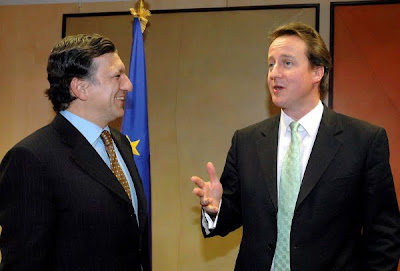 They write – A silver lining of the European debt crisis is starting to emerge: falling prices in the United States.

That must be one of the most naive sentences I’ve ever read.

Consumer prices fell 0.2 percent in May, the Labor Department said Thursday. The department said Wednesday that wholesale prices fell 0.3 percent. Both were driven by a dip in global prices for oil and other commodities caused by investor concern that, given the troubles in Greece and other European nations, the global recovery could slow.

Also Thursday, the Labor Department said that 472,000 people filed new claims for unemployment insurance benefits last week, up from 460,000 the previous week and adding to evidence that the job market is recovering very slowly.

Yes. This is some silver lining.

In the short run, the biggest impact of the European problems on U.S. inflation has been on commodity prices, and that impact was almost instantaneous; the price of oil, for example, fell from a recent high of $86.84 in early April to $77.67 Wednesday. But the slowdown overseas, combined with continued high unemployment and idle factories in the United States, is causing very low inflation even aside from the recent dip in energy prices.

Few analysts expect prices to start falling outright, a dangerous phenomenon known as deflation, though many would concede that the risk of deflation taking hold has edged up following the deepening of the European crisis.

Ananlysts never like to foretell doom and gloom. Their employers might stop their pay checks if they do.

That risk could become more severe if the economic recovery, which has been underway for about a year, was to weaken or cease. There was positive news on that front Wednesday, as the Fed announced that industrial production rose 1.2 percent in May, more than expected and the 10th rise in the past 11 months.

That helped bolster the case that the U.S. economy continues its steady expansion heading into summer, despite some recent disappointing data including a weak private-sector job growth figure for May and a steep drop in retail sales that month. The manufacturing sector has become a significant driver of growth.

“The breadth of the rebound is impressive and creates self-reinforcing demand for materials and equipment across the whole manufacturing sector,” said Daniel J. Meckstroth, chief economist at the Manufacturers Alliance, a trade group.

The only silver lining is in fact the growth of US manufacturing as costs tumble. The rest is merely heightened risk of a depression. Can the UK manage a similar rebound in manufacturing after years of manufacturing falling? Why not, if we repatriate powers from the EU and get rid of the regulations which inhibit employment. It might be about all we have to fight with, so Cameron had better do some brisk trading with the EU, and liberate our industry so we can compete once more. This looks like the only road back to growth.

2 Responses to “Washington Post Thinks Deflation Is A Silver Lining!”