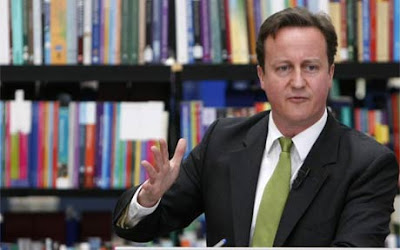 The Telegraph has been accused of many things recently, such as fronting the campaign to get rid of David Laws by forcing his resignation from the Coalition’s Front Bench. But one thing it cannot be accused of is a lack of optimism.

On the day that Cameron declares that Britain’s projected debt position by 2014 is going to be worse than Labour stated, due to its being based on an overly optimistic growth rate of 3%, the Telegraph comes down heavily on Cameron saying that in fact things are in fact turning out better than Darling indicated they would.

Exhibit A in this more optimistic prognosis is The Treasury’s figures for April 2010 which show that borrowing was not £178 billion as originally projected by Darling, but lower at £145.4 billion.

In a year when the stock market has enjoyed its fastest ever single year rise throughout history, increasing by 70% on the back of the various QE programmes, launched after the Lehman’s collapse, it would be surprising if Government Revenues had not been affected to some extent.

It should be noted that the government spent 7% of GDP (£100 billion) on rescuing financial organisations and launched QE into the gilts markets of £200 billion as its contribution to achieve this effect.

The shares of the banks that were rescued and part nationalised are now falling to lower levels, and the chances are that in the next few years there can be no easy or full recovery of the money Brown had pumped into RBS, Northern Rock and TSB.

In fact the bear market is back. The FTSE is down from 5850 to 5080 and no doubt ready to head south from here to find much lower lows in the next two years. The QE pump is switched off. Cameron will not be able to turn it on without causing interest rates to rise. Brown’s has used up all the slack. The coalition has no options left. As Byrne said, all the money is gone. It wasn’t a joke.

As far as The Telegraph is concerned, it will soon be eating its words that Cameron has hit an easier patch of ground. Labour used up every part of ‘easy’ we will see for many years to come. Cameron is right. ‘Tough’ is here, and thank God he’s in Number 10 and not the other lot who squandered Britain’s economy for thirteen years.

(The only other point is that I still doubt the Treasury’s figures. The month by month figures were showing collapsing revenues up to January 2010. There were some very odd adjustments made in the 2009 December Spending Outturn Report, which have never been explained. Spending was probably under-declared by about £60 billion. Cameron has enough to contend with, without going over that aspect of Brown’s figure-tampering. He has decided not to expose Labour’s worst lies it seems. What’s the point in going over old ground? Also he can cut without it showing in the figures to begin with, as his spending figures will look the same, even after some serious shearing has been carried out. Brown and Darling Take Us For Fools)