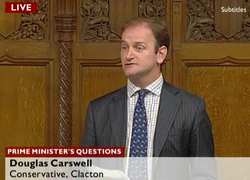 12.19pm: Douglas Carswell asks the second hostile question from the Tory backbenches. Why is there to be a referendum on AV – which wasn’t part of all parties’ manifestos – but no referendum on Britain’s relationship with the EU – which had been? The Prime Minister responds by confirming the Coalition will introduce a referendum lock to stop any transfers of power to the EU without the consent of the British people.

Are you listening over there in Brussels? Thought not!