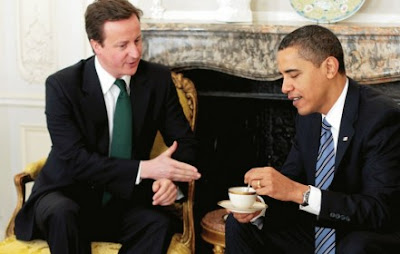 They say that once governments start making announcements about the future state of any currency or market, whatever they are promising will happen, the opposite is bound to occur. Well now we have the head of China’s national pension fund declaring that the Euro is bound to survive the current crisis, and that means only one thing, that the Euro is certainly doomed.

The head of China’s national pension fund said that the euro will in fact manage to survive the current debt crisis.

But that doesn’t mean that it won’t go down without a fight.

And that fight is being exercised on many fronts, of which one is the front against the British, and its current government’s determination to stand aside.

It seems by now that President Obama will not take even one step without displaying his hatred of the British. His grandfather was a Mau Mau ‘fighter’ in Kenya in the 1950s and he allegedly he was tortured. The Mau Mau were the Kikuyu tribe, and these, by all accounts were a murderous bunch with a high level of inbuilt aggression, or so my family members who lived there tell me. If Obama is a Kikuyu with a grudge, we are in trouble. The Special Relationship should be renamed. Obama’s Payback Time or something appropriate.

Obama, on a single day, tells the British, his primary allies in Afghanistan that we don’t have enough troops fighting there, no doubt picking up on the Conservative government’s PR ‘change’ that the war is becoming a waste of resources, and he rounds that off by declaring a determination to bring BP to bankruptcy over the oil leak in the Caribbean.

This is no mean threat, to be deploying over a crumbling British economy, threatened by large government debts, with BP paying many British peoples’ pensions.

Cameron is angering the One World Government set-up, by stating that Britain will not accept EU supervision of its economic decision taking, on the one hand, and by Cameron permitting by degrees, a watering down of Britain’s commitment to the Afghanistan war.

President Obama, keen to avenge his inherited hatred of all things British, is no doubt looking for any methods at his disposal to bring Cameron to the negotiating table, and ensure that British money is put at the disposal of the EU, to try to rescue the Euro, and the OWG can still call easily and readily on British military support.

Obama will use the BP situation as his bargaining chip and will see if Cameron can be made to crack. Cameron should hold his ground, in my opinion, and not back down to Obama on Afghanistan or Merkel and Sarkozy on the EU. It’s going to be a baptism of fire, though. Can Cameron truly become King Of The British, or will he, like his predecessors, find that international concessions make life so much easier?

EXTRACT – Investors were particularly furious about the suggestions that BP should not pay a dividend until it cleaned up the oil spill. Most shareholders rejected concerns that the costs of a cleanup and possible damages could force BP into Chapter 11 and said the drop in the share price is not justified by the value of BP’s assets.

“BP has many problems in the U.S.,” Justin Urquhart Stewart, co-founder of Seven Investment Management in London, said. “One of them is that it has the word British in its title.”

FT – Adopting a more emollient tone, David Cameron, UK prime minister, said on Thursday that the British government stood ready to help BP with its clean-up efforts and that he completely understood US frustration. Speaking on a visit to Kabul, he said he would be discussing the “environmental catastrophe” with President Obama, with whom he is due to talk on the telephone over the weekend.

The concerns of the UK business community come amid mounting unease in Britain that attacks on BP for its handling of the Gulf of Mexico oil spill are being dictated by the politics of November’s midterm Congressional elections rather than normal regulatory considerations.

Repeated references by senior US politicians to “British Petroleum” – which has not been the company’s name since 1998 – have fuelled fears of a wider backlash against UK companies.

Richard Lambert, director-general of the CBI, the UK employers’ group, said the presidential attack was “obviously a matter of concern – politicians getting heavily involved in business in this way always is”.

Mr Lambert suggested the White House strategy was misplaced. He said: “Apart from anything else, BP is a vital part of the US energy infrastructure. So the US has an interest in the welfare of BP, as much as the rest of the world does”.

Miles Templeman, director-general of the UK’s Institute of Directors, said he was “very concerned – this sort of political rhetoric is inappropriate”.