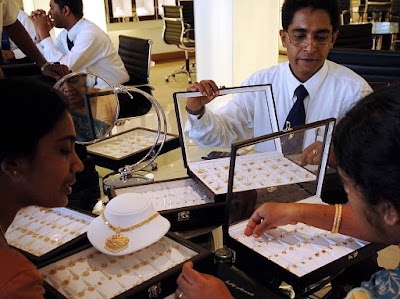 The gold market is getting highish again,and is looking up with higher highs and higher lows, although progress is not stellar.

There are two or maybe three problems with this.

The price is being set up for a fall, which will create many losers eventually with a few big winners who sell out in time.

One day the price will have to return to more normal levels, if anyone is ever going to buy any jewellery ever again, the main part of the gold market, which employs millions across the world in making and selling. All these jobs are currently under threat. Gold prices are already putting jewellery beyond the level of most peoples’ affordability.

The gold bull market is temporary, but will do great damage to many peoples’ livelihoods while it lasts. What’s the point?

The next problem is the effect that gold price psychology has on the economy. In the Middle Ages in Britain, gold became part of the coinage as advocated for today’s world by many ‘Ron Paul’ types. The effect was that people did not spend their money. They hoarded it.

This caused a slowdown in the economy, which hurt many people. If money becomes too loveable, it ceases to be the tool of economic growth, and becomes the agent of depression. Money has to circulate to benefit the majority, not be hoarded by the rich.

The excuse is that inflation is coming back. It isn’t. Money supply in the USA is falling by 10% a year, and prices are barely rising. Deflation is breaking out across the world, not inflation. The sums being sent by governments on QE are dwarfed by the debts accumulated over the last decades. The scaling back of debt is far more powerful. Inflation is dead for years to come.

The politics of gold has not even started to be an issue in most peoples’ minds, yet it should. China are a great nation of gamblers, and the ending of their real estate boom has released a lot of investors looking around for the next bubble to take a ride on. The Chinese government has stated that they don’t see gold as an important part of their reserves. The gold market is simply too small to play a significant role in the modern economy. They are starting to talk gold down, at last realising the dangers that a bubble would pose.

The Chinese government doesn’t want the tail end of the property boom to feed into another bubble in gold, and they could easily decide to restrain the market in one way or another. The price has risen from $350 to just under $1250 in less than ten years. Demand for gold jewellery in Britain is already down 85% in the same period. If gold goes up from here, the closure of jewellery shops and manufacturers, already of concern could become a torrent. In a market which is already distressed, any further rise will be a killer blow.

Is there a case for intervention? In the 1920s Depression, gold was confiscated by the US government to stop hoarding of the metal with its attendant negative effects on the economy. I can see that happening again. Meantime, there will be much suffering from the firms that depend on gold trading to make their living.

It would not take a lot for sentiment to change against gold hoarding and for governments worldwide to take steps to stop the bubble from developing any further, with all attendant negative effects.

One way to ensure people have to lend to the government at low interest rates to secure their savings from crashing stock markets will be to seal off other alternatives, such as gold. Stock markets will be tumbling again soon enough. The 1920’s are coming back, folks, and gold will be back on the hit list once the real financial trouble becomes just a little more visible.

Gold will become a political issue. She is the sister of Fear and needs to be kept indoors until the storm is past. Governments should act. Gold Licensing should be brought back in as existed in the UK until 1977 for people to buy gold bullion (Limited to manufacturers and banks). Tax should be added to gold coin sales (as it is to jewellery already), or with the obvious moves to Tax and License avoidance that would follow, illegally held metal should simply be confiscated. In essence control is needed, and urgently.

14 Responses to “Governments Must Confiscate Gold”