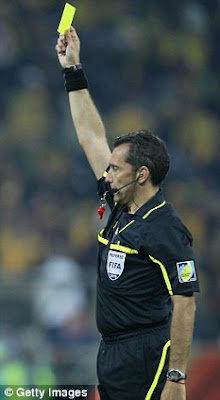 Uruguayan Referee with ‘previous’ – Jorge Larrionda
It was interesting that the first German goal-kick entered the British penalty area, with the German goal-keeper falling over as he took the kick, he was whacking it so hard. This was obviously an intended tactic – to land goal kicks deep into the opposing area.

So why when he took the next one were all England’s defenders forward in position? I am no expert on football tactics, but surely the first one was warning enough, and a redesign of defence for deep goal kicks should have been implemented immediately to watch out for this tactic.

Ashley Cole is playing a blinder. Come on the reds.

What a farce. When 500 million people around the world know it’s a goal without any doubt, surely the referee could be told as well. Had the score been 2-2 at half time, the second half could have been very different.

From 2-1 down, Capello decided to send his infantry over the top and his defenders forward, taking maximum risk to get a goal, only conceding two breakaways for his trouble.

Oh well. You cannot take this seriously, and I don’t, but for all the emotion expended, you’d think that somehow a competent manager could be found who can speak English for a start, and read the tactics of the game better than Capello. I’m sure he’s a very nice fellow, but I would imagine England would have half a dozen capable club managers who could do better.

My friends say they can relax now, and enjoy the World Cup now England is out.

Germany is dominating the continent now in the world’s most important sporting arena, as well as Europe’s politics and economy.

The sporting outcome of the world cup for Europe, matches well the situation of the economies – France, Italy, Greece out. Britain struggling to hang in there but falling early, and Germany in the ascendant, with the Netherlands and Slovakia still with hopes alive.

Two of the PIGS survive, however, Spain and Portugal, so currency issues cannot be said to be deciding football results entirely. So no need to make any outrageous political claims. Or is there?

Uruguayan referee had previous for ‘irregularities’ (taking pay-offs?). It seems that the corruption at the heart of world government extends into world sport. Hardly surprising.

EXTRACT – In this year’s tournament, where he has refereed three games, Larrionda has already attracted criticism for his failure to spot Tim Cahill’s clear handball for Australia which ultimately cost Serbia a place in the last 16.

It seems like Britain and Serbia are equally the dogs of the world’s political system and major sporting events.

How we won the rugby world cup, I’ll never know. The refereeing in that was truly awful, but Johnny Wilkinson was simply too effective, despite it. It might help the psychology of players and supporters to realise, though, when they are playing against both opponents and referees combined. The disappointment would not be so bad, and the tactics used might be different.

FIFA still refuse to use technology to decide whether goals are scored or not, which enables a little bit more referee ‘input’. It all fits.

The word ‘stink’ comes to mind. I don’t get so emotional about football as many do, but I feel sorry for the game and a world that cannot organise itself, and is riven with corruption at seemingly every level. I am proud of the British football team’s performance, and admire Germany’s, but detest the governmental systems that enslave us all, damaging our sport, and wrecking our economies.

There is only one road back from this hellish corruption, and that is democracy. We still have to believe that somehow we will get back to something that makes sense, from the nonsense we are forced to live within right now.