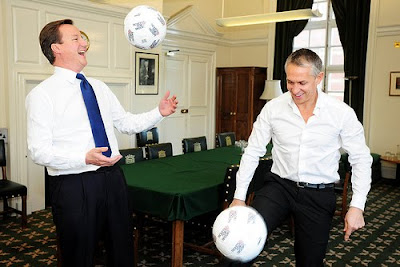 England have just kicked off playing Slovenia. It looks a bit panicky and uncomfortable. Let’s hope it settles down.

Whatever is about to happen on the pitch, nothing could equal the total disarray in the French camp, which has followed on from their loss to Mexico. The players are on strike. The team manager has lost his cool. The sponsors are withdrawing, and the French President is getting involved to try and get to the bottom as to why key players were kept off the pitch – such as Thierry Henri – and bring the national outcry to an end.

France’s World Cup campaign, crippled by dire performances on the pitch, internal strife and a players’ strike, went from bad to worse when Crédit Agricole pulled an advertising campaign and sponsors demanded action by the country’s football authorities.

The French bank said on Monday it had stopped early the advertising campaign, due to run until June 25, “in view of the current controversy surrounding the French national team”.

The team’s corporate sponsors have held conference calls to voice their anger at the players’ refusal to train.

One person who took part in the conference calls said that the sponsors believed the situation was “unacceptable”.

France is on the verge of elimination from the tournament, their 2-0 defeat to Mexico on Friday forcing tension between management and players into the open. The French team plays South Africa in its final group game tonight.

The crisis in French football – and the behaviour of the national team in South Africa – has triggered an avalanche of criticism from social commentators and politicians in France. Christine Lagarde, finance minister, said she was “appalled” by the players’ behaviour.

It has highlighted, too, the sometimes fragile relationship between teams, players and their sponsors.

It all seems like a load of prima donnas, all competing for attention, to the point that they can’t work as a team, and do the basic job of playing a simple game of football.

It’s too much money rotting the fabric of the game.

England’s progress could turn the same way or surge from here. But already we can see the same signs of disconnection.

It’s no different from most other aspects of life, including government. Too much money has been borrowed and spent, placing commercial interests way ahead of any other values. The pride in the game, in the nation, in the team have all been eliminated.

It’s no different to the ludicrous sums which governments have squandered on the NHS, and other state services. The more money has been spent, the less the basic job gets done, and the more prima donnas compete to be the most self-important.

If there is a depression coming along, and all these fallings-out across European football are symptomatic of social structures in a state of collapse, no different from what’s going on with the EU and the Euro, as more and more money is pumped into a growing black hole of hopelessness, then maybe one good outcome will be that life can get away from its total focus on money.

Maybe human beings can count for something once more, just as they are, with no need for any millions in their pockets, rotting their brains. Respect will be earned by behaviour, and attitude, not by the number of noughts a person can command. It’s one aspect of Cameron’s government which looks hopeful. He doesn’t need any of the trappings. He’s keeping it simple…so far.

PICTURE – Gary Lineker,former England Captain and football commentator kicks around in Number 10 with Cameron. Communication skill is the bottom line of success in most enterprises. Lineker has it. Fabio Capello seems a little light. Cameron’s made a good start.