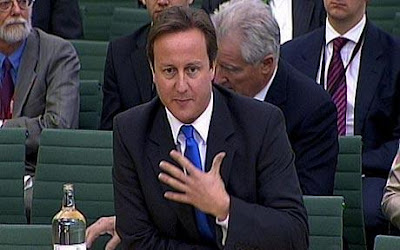 The latest EU conference was timed well. The troubles in Greece are temporarily stifled. Those is Spain are being denied.

Stock markets are holding up. Government Bonds are selling sufficiently well. Even the Euro has taken a few tiny steps back up from its latest lows. In combination, it was all enough to give the EU’s leaders just enough credibility to keep talking of expanding the EU’s powers to include economic government.

Cameron held on to his refusal to get more involved with the EU’s programme of economic governance, and after the conference, he stated that he had met his objectives. But one German diplomat countered this by saying that Cameron should not be so quick to claim victory and that he should wait until October, and see what the position is like then. The EU will be winding up a second leg to this negotiation, it seems.

What if the region’s stock markets were in free fall, the Euro was hitting new lows, and one or two countries were on the point of default by October? Cameron would just walk away from the mess, and be vindicated in doing so. This conference was the moment to tie Cameron up, while the markets are somehow miraculously holding on. Once they crack, tying Cameron up in red tape will be impossible. The EU missed their best chance. From here their position can only weaken.

EXTRACT – At the European Council in Brussels this week, David Cameron was polite and charming, but his people insist that we shall never be part of the euro and we shan’t pay for those who are. The first part feels secure – never has the Queen’s head on our notes looked more comforting than it does today – but watch out over the second. Brussels wants to impose the equivalent of the Common Fisheries Policy on our financial industries, and to increase our European budget contribution to pay for its mistakes. In our terror of an old-fashioned Tory euro-row, I bet we give in on some of this.
Again and again in politics, great schemes don’t work – Soviet Communism, for example, and now the euro. Rational people tend to conclude that, because a scheme doesn’t work, it will quickly stop. Unfortunately, rational people are wrong. Bad political schemes are usually given up only when they have been tested literally to destruction. It would be much better for Europe if the euro had never happened, and I long for it somehow to fade away, but the process of destruction will be horrendous, and it is only just beginning.

I disagree, Charles. This time Cameron has to stand firm. This is no longer 1992. This is like keeping the Spitfires back from The Battle For France. We will need them for the Battle Of Britain. We need our money to save ourselves. The cheapest solution for the Euro is for Greece etc to withdraw and default. Every penny we lob in merely delays the inevitable.

The Euro will become the DM once more, and only solvent countries will remain members of the eurozone. Our message to the EU should be ‘do it’ i.e. get on with the break-up and the preservation of the core. We need stability in Europe, not the universal bankruptcy which will follow endless pointless bail-outs. We should not fear the collapse of the Euro, which is already inevitable. We should though greatly fear its pointless preservation.

One Response to “The EU’s Last Days”