Never mind the acres of news print, the denials and the rhetoric. Look at the price of Spanish government debt. The Shock & Awe bail-out clipped back the rise in the cost of borrowing for the Spanish government, for a week or two. But the markets are now raising the cost once more. In fact it is surging out of control.

This is the only information you need to know the score. Look at the chart.

Spain is careering rapidly into a situation similar to that of Greece, where its huge debts are becoming unaffordable. Lenders fear default and are backing away. The EU pulled out all its stops to launch Shock & Awe to calm those fears, but it hardly touched the sides.

Bailing out the eurozone will need an endless feed of cash, but there is no one willing to fund it. The Germans are already sick of carrying the load. The French elite are still dreaming of an EU empire to be bought with a German cheque book. It ain’t gonna happen. The price and the direction of the market tells you.

Like all the others, Spain will save more of her creditors’ money if she negotiates a default now. The longer they leave it, the more the lenders will lose. Leaving the eurozone is the only way out.

In Greece 10 year money is back over 10%. How long can the charade of ‘bailed-out=creditworthy’ go on? See FT Bond Market Tables.

Financial Times. Cameron says that EU fiscal discipline and supervision must apply to eurozone members only. Horse the bolted stable after has door shutting. 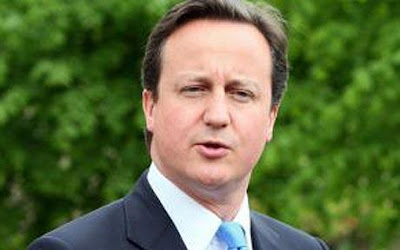 Daily Telegraph. Cameron will resist any loss of sovereignty of controlling Britain’s budget. Ok. But how hard will he fight? This is the moment of Euro truth for David Cameron.

The latest push for EU integration could become a major headache for Mr Cameron. The reforms could involve changing the EU’s governing treaties, putting his Government under intense pressure to honour its promise to hold a referendum before any new powers are transferred to Brussels. Many Tory MPs are Eurosceptic and determined to press for a Europe referendum at any opportunity because Mr Cameron denied them one on the Treaty of Lisbon. This could cause tension between the Tories and their coalition partners, the pro-EU Liberal Democrats.

Look at the chart. If $1 trillion cannot change a thing as regards the creditworthiness of Spanish government debt, how much exactly will the eurozone require to hold it together? Britain cannot afford to get involved. Cameron has to hold the line.