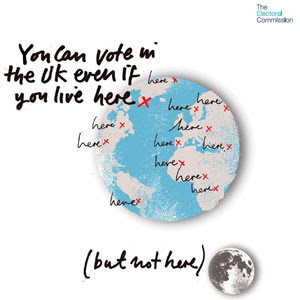 My comment on PB If [the overseas] vote was ‘harvested’, it could add more heavily to Conservative than Labour.
But that would need the cooperation of British Embassies who have the details of most of these voters’ whereabouts.

Reply from Edmund In Tokyo

I think they could do a lot to increase the turnout rate without the help of British Embassies. (And I doubt if the embassies do know where most people live? Unless they live in a war zone, do people really have nothing better to do than with their time than spending it registering their addresses with the British Embassy?)

They could start by removing some of the arbitrary hurdles to registering overseas. What stopped me this time (apart from being registered in a seat where I thought both the main contenders were fine, so I wasn’t that bothered) was the requirement to get a signature of a UK national living outside the UK. I really can’t think of a good reason for this – even if you need a signature and it has to be a British person (obviously we wouldn’t trust Johnny Foreigner) why can’t it be someone living in the UK?

Interesting reply. There seems to be more difficulty placed in front of those trying to obtain a vote from overseas than those doing so locally. A Proxy vote can be passed over with a mere signature of the voter, but an overseas vote cannot be cast without confirmation of ID. That shows how much Labour have gone out of their way to stop people overseas registering in order to vote, knowing they would be predominantly Conservative voters.

I would not suggest a relaxation of standards for international voters but surely a passport copy or scan would provide sufficient ID, along with signature of the voter.

Embassies are putting in a big effort to persuade Brits overseas to register with Embassies, and many are doing so. They could inform them of a location where they could vote locally – The Embassy? and ensure as many voted as possible. The Consul in some locations is a persuasive character, as are Ambassadors. Surely British Embassies should be persuading British citizens to vote in their national elections. Most are excluded from voting in their current country of residence.

See britishexpats.com list of how many Brits live abroad and where they live, here, all 5.5 million of them.