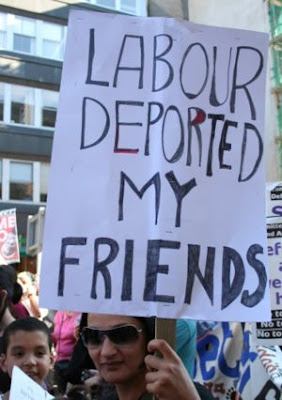 Damian Green, the Immigration Minsiter said on Channel 4 News tonight that the government is considering auctioning visas. What a good idea. Where and when does the bidding start? At least it’s an honest approach, and clear cut.

If the government wants immigration numbers down, it’s useless to put a cap on non-EU immigration alone, when 90% of the numbers arriving are from the EU.

The way to reduce immigration is either to withdraw from the EU, or make non-British EU Citizens pay to come here, unless they have a job skill vitally in need. Why have a different system for the two categories?

If companies want the workers in, or husbands want to live with their foreign wives or children, they can either get them here by them having the right qualifications, or they can pay for their visas with cash. Why should anyone have a right to walk into another country free?

With a price to be paid, the numbers coming in will be held in check, and the government will get plenty of receipts to help fill the coffers. It will help the economy twice over.

Maybe EU Citizens could be given a 25% discount or something, and if other EU countries want to replicate the system and charge Brits for visas, why not? There should be a price anyway. Go for it!!

I paid $20,000 for my Resident Retirement Visa in the Philippines (as a loan). Malaysia sells visas in a similar way. Why not sell working or fiancee visas to Britain from anywhere in the world? What price? $50,000? $100,000? That could raise $10 billion in a year per 100,000 incoming new residents. Our troubles would be over. It costs the country money to accommodate immigration. Why should we pay?

This solution would be better than making nasty political and racial decisions EU-style. Let the market decide. Presumably terrorists and serial killers would not be permitted to bid to live here, as they can now free of charge.

1 MILLION EU IMMIGRANTS IN UK. May 2010.
Open Europe – The Telegraph reports that Eurostat figures suggest fewer than 300,000 Britons are working in the EU compared with just over one million of their European counterparts working here, despite Gordon Brown’s previous claims that migratory flows are equal in both directions.

There are six million Britons living abroad, most of them working. The figures given mean that maybe only 10% of them choose EU countries to go and work in. So much for the EU being being our key partners.

The EU is a sideshow. The best opportunities are elsewhere. If British workers know that, why doesn’t its governmment?

If we had received $100,000 for each immigrant, the government would have had $100 billion from EU immigration alone. Gordon Brown must be kicking himself.

UPDATE – Asylum seekers not required to return home should be treated as having taken out a loan like a student loan, and have to repay it over their lifetime.

2 Responses to “Coalition Should Put Visas Up For Auction – EU, Non-EU Alike”