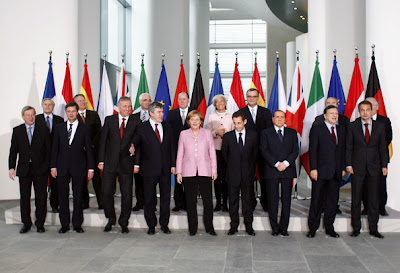 Europe’s leaders during happier economic times. Their faces look very different nowadays. Click to expand.
The recovery falters in the US with consumers saving hard to pay off their debts. The Fed is divided as to whether more QE can be afforded or not. QE probably won’t happen until things look worse than they do right now. But with USA money supply tumbling by up to 10% a year, the squeeze will impact everyone around the world in the months ahead. Europeans whose governments are tightening their economies to get rid of borrowing will be hit very hard. Maybe the UK Coalition Government will be cutting CGT and VAT again within weeks, and paying off debt will get pushed down the loist of priorities, as the world hits the meat of the coming depression.

Ambrose Pritchard Evans is onto the story.
Telegraph.

Gabriel Stein, from Lombard Street Research, said the US is still stuck in a quagmire because Mr Bernanke has mismanaged the quantitative easing policy, purchasing the bonds from banks rather than from the non-bank private sector.

“This does nothing to expand the broad money supply. The trouble is that the Fed does not understand broad money and ascribes no importance to it,” he said. The result is a collapse of M3, which has contracted at an annual rate of 7.6pc over the last three months.

Mr Bernanke focuses instead on loan growth but this has failed to gain full traction in a cultural climate of debt repayment. The Fed is pushing on the proverbial string. The jury is out on whether or not his untested doctrine of “creditism” will work.
“We are now walking on deflationary quicksand,” said Albert Edwards from Societe Generale.

Maybe the G20 this weekend will result in a new announcement of coordinated QE across many nations. That seems unlikely if Germany, Britain and the US have any say, where debt reduction is winning the balance of the political argument. The cold draft of a quickening downturn might force a reversal in policy, but maybe not this time, where the current fashion says that the credit reduction game will win.

Only Sarkozy is openly campaigning for the opposite as far as we know. This time the world will take the downturn on the chin. The result is unlikely to be pretty.

THE INDEPENDENT Bill Clinton’s economic adviser –Stiglitz has one more practical solution to offer. Governments should set up their own banks to restart lending to businesses and save struggling homeowners from repossession. “If the banks aren’t lending, let’s create a new lending facility to do that job,” he says. “In the US, we gave $700bn to the banks; if we had used a fraction of that to create a new bank, we could have financed all the lending that was needed.”

It all sounds so easy. There are no top down solutions, other than holding the ship steady. The rough sea conditions are coming anyway.

Banks will not lend to entrepreneurs out of fear of not being repaid. That is because prices need to fall to the point where the banks believe in the investments they are being asked to fund. Once property prices, shares and commodities have all halved in value, banks will lend to solvent businesses more readily. The trick is to survive the halving of asset prices. The next three years or so should put the floor in. From there the world can rebuild. Working off debt is not merely repaying the debts. It is coping with the fall in the elevated price levels which cannot possibly go on much longer.

BBC on G20 – A draft version of the summit’s communique suggested the Group of 20 richest and emerging economies was nearing a compromise, Reuters news agency said.

This would see an agreement to halve budget deficits by three years and toughen banking regulations.

“Because instead of stimulating growth they pay more attention to fiscal adjustments, and if they are exporters they will be reforming at our cost.”