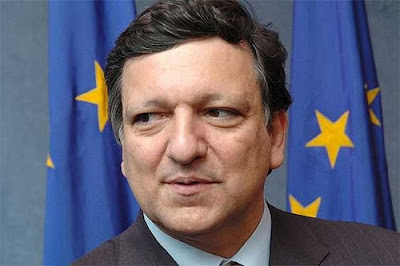 Reported in Ireland two days ago but not in the UK, the President Of The EU Commission stated that he could see a coming collapse of democracy in Europe. Far from expressing any regret at the role played by the EU in first swamping the PIGS with excess lending, and then demanding politically polarising austerity measures, Barroso probably sees such a collapse as the best option. That way the EU can wash their hands of all the problems they have created without loss of face.

IF the EU were to be rejected by a democratically elected government within the eurozone,that would spell final humiliation. But a rejection by a hardline military regime would be presented as ‘well, we did our best. but what can we do with these inferior peoples?’

The article from Ireland.

In a recent meeting of trade union officials, the European Commission President, Jose Manuel Barroso, predicted that democracy could ‘collapse’ in Greece, Spain and Portugal, should the austerity measures being enacted in those respective countries lead to civil unrest or military coup.

It doesn’t sound as if Barroso is all that bothered about the destruction of Europe’s post war democracies. It’s a case of sour grapes,of course. If we cannot make it work, no one can, is how he wants it to be.

At a time when so many people around Europe are feeling the pinch, Mr Barroso and his cohorts seem pleased to continue on the same track. It would seem that they, who are insulated by the money and perks which Brussels offers to its own, are not really so concerned with the real effects which the austerity measures will inflict on many Europeans, but rather on preserving their “empire” – seemingly at any cost. That is how Mr Barroso referred to the EU in the past…as an “empire”, and it seems clear, especially in the light of the running of the second Lisbon Treaty here in Ireland, that “democracy” was never really that high on the list of priorities for the EU.
From The COIR Campaign.

2 Responses to “Barroso Predicts Collapse Of Democracy In Eurozone”