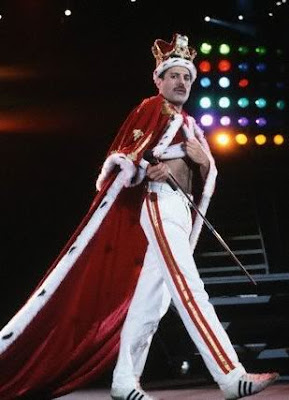 Talking to a few folk at home (I’m back within a week volcano permitting), they seem either pissed off with what’s going on, especially with the endless media coverage, or some are highly amused by the total political shambles that has been created. It’s as if no on wants to take any responsibility (with one or two notable exceptions of course), and the result is a cacophony of disjointed and directionless image creators (what else are politicians?) all rushing around trying to work out where the door is.

The Lib Dems seem especially struck down by an inability to set on one direction. They campaigned for the Hung parliament, but having got one, they have absolutely no idea what to do with it. Inspired by this, I thought I would adapt Queen’s ‘crazy little thing called love’ for Nick Clegg to help his mob to rally around and decide which way they are going to jump.

CRAZY LITTLE THING CALLED POWER (A tribute to the late Freddie Mercury, to be used by Queen Tribute Bands touring this week)

This thing called power,
We cry like babies all night.
We swing. We jive.
We shake all over like jelly fish.
We kinda like it
Crazy Little Thing Called Power.

There goes Nick Clegg again.
He looks good on TV
He drives us crazy
Doing deals with Conservatives
And Labour all at the same time..

He’s gotta be cool. Relax. Keep calm, and watch his back.
Talk to Gordon. Chat to Dave.
But none of them are quite good enough.
We’re not ready.
For this Crazy little thing called power.

On guitar – D,G,C and A7 in middle section. It’s very simple to play. It just needs a good sense of rhythm. Just think of Freddie Mercury, and you’re there.

Maybe a little jollity might help the awful tensions arising in the yellow camp.

John Redwood is not impressed –

I assumed the Lib Dems would negotiate with both sides, even though they said they would just negotiate first with the Conservatives to see if they could do a deal. We now learn Vince Cable was meeting his Labour friends in private whilst David Laws was meeting Conservatives in public. Why didn’t the Lib Dems announce at the beginning it was a contract race or auction, so all could see what it was about and could bid accordingly?

It’s no advert for the “new politics”. It is fascinating that Lib Dems have struggled and argued for 34 years for another chance of a hung Parliament. Now their prayers have been answered they do not know what to do and are by all accounts hopelessly split over whether to do a deal, what type of deal to do and with whom.

On display are all the features of hung Parliament some of us warned about. The politicians have to try to make deals, which entails ditching important promises to electors because no party has the votes to keep its word, and seeking to decide who should govern and how they should govern behind closed doors. Meanwhile government drifts dangerously, when we need someone in charge who can start to sort out the finances in a way designed to fuel and further recovery, and overhaul the approach to the banks with recovery in mind. We need greater honesty and transparency from our politicians. The Lib Dem way of negotiating offers less of all of these things.

I think Gordon Brown was right to resign. However, he has not resigned forthwith and remains in Downing Street. We now know that if Labour does patch up a deal with various parties and stays in office, we will have a Prime Minister no-one voted for as Leader, a person who did not take part if the famous debates to give us all a choice of Prime Minister.

Many Conservatives are resolutely against the Alternative vote. It is not proportionate. Indeed it woudl have cut Conservative representation in past elections, when Conservatives got a smaller share of the seats than they had of the vote. It would be quite wrong for any government to seek to introduce this without first asking the British people in a referendum.

2 Responses to “Lib Dems Should Consult Their Inner Freddie”