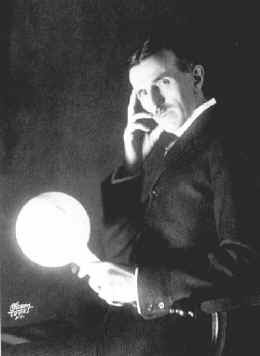 The greatest inventor of all time – Nicolas Tesla, far ahead of his time.
The future is arriving quicker than we hoped. Tesla Motors which manages to send its battery-powered cars over distances of 300 miles between a recharge, which in any case cost only $10, has teamed up with Toyota, is building a 1000 employee plant outside San Francisco, and is launching on the stock market.

Tesla only started a year ago and is already confident enough from growing demand for its output to launch new vehicles lower down the cost scale onto the world market. The Tesla motor is incredibly efficient making all other electric cars seem irrelevant. The motor somehow sucks electricity from the environment making a 5 to 1 improvement on the actual power wired into the car.

This technology is approaching 100 years old. JP Morgan who was funding Serb Nicolas Tesla’s research, ‘cut him off’ once he realised Tesla understood how to supply electricity without cables and wires, drawing power down from the ionosphere.

If these cars are allowed to sell, they will murder the market worldwide. That won’t be all. Once people realise that electricity can be generated at 20% of the current cost, and distributed without cables, through resonance, a new industrial age, based on a limitless supply of almost free energy will be upon us.

The coming Depression will be cracked open from end to end, and a new industrial boom season will be here. I’m talking ten years time unfortunately. The next five years will be all about paring down debt and reducing the size of governments across the globe. The private sector will then surge back and reclaim its rightful place.

Drive your car for nothing.