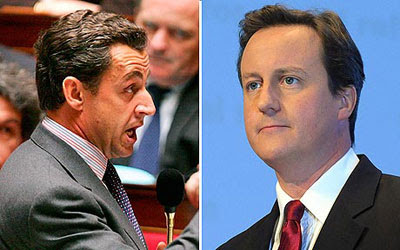 Watching Cameron talking next to Sarkozy yesterday gives an amazing scene. Sarkozy’s body language is as awkward as could be imagined. He is swallowing hard in discomfort at every word Cameron utters, and is just desperate to not hear the things Cameron is saying such as, ‘we were right not to join the Euro’.

Yet Sarkozy could not find any chink in Cameron’s self-assured certainty of delivery, and realised that here was no easy meat like he had had with Gordon Brown. What an incredible difference. The formality and cool professionalism of Cameron contrasts cruelly with the Sarkozy-Brown love-in which was verging on pornographic.

It’s only weeks ago, but Sarkozy must now sense that the easy days of getting Britain to sign up to almost anything that Europe wants, which had gone on since Blair grinned his way into Downing Street in 1997, are well and truly over. There will be no more pornographic opportunities to slobber all over this British Prime Minister in public. David Cameron at the helm means business only is required, not unwanted familiarity. 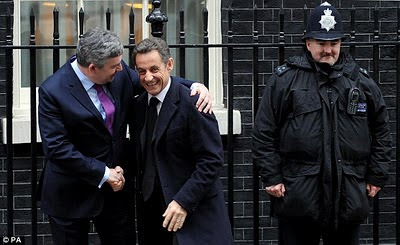 Will the Europeans now let loose the speculators to attack the Pound as they promised they would, in an attempt to bring this unruly and unruffled operator to heel? ‘You’ll see what we can do,’ threatened a French Minister a week ago. I’m not sure Cameron will give even that threat the time of day. That too will be down to business, and let the markets find their level, as he carries his whirlwind leadership on and up.

Strong leadership is what we have in Britain once more. It’s been twenty years and we’re good and ready. The French though, it seems, are not.

We need a less expensive and less regulating EU to get Europe back on the road to prosperity. The Euro, the EU’s finest achievement to date according to its supporters, is visibly damaging growth and income levels.

The EU which demands spending cuts of its member states should lead the way by cutting its own spending. I am not expecting it to see the problems it creates, as its answer to everything is more European government.

BUT – in fact, the coalition supports raising costs of running industry through the roof –

Meanwhile, the new Government has released the full details of the coalition agreement. However, the sections on Europe contains no new details than those revealed in the initial outline released last week. On the EU’s emissions reduction target, the coalition supports increasing it from a cut of 20 percent to 30 percent by 2020, based on 1990 levels. Controversial home information packs (HIPs) have been scrapped, with only the energy performance certificate, a requirement under EU law, surviving the cut.

The bullshit flows as strongly as ever at ground level.