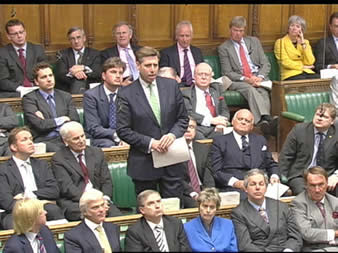 Graham Brady. Will he be elected Chairman of the 1922 Committee this week?
Douglas Carswell MP’s blog this morning contains a positive message about politics (located via Iain Dale’s Daily Dozen). This will help to assuage the surge of negativity pouring out via torrents of journalistic and blogging ink, since the Liberatories arrived on the scene.

The point he makes is a good one. It is in favour of MPs having an independent mind, standing up to the Whips, and standing for what they personally believe in. He in turn picked up the theme from Fraser Nelson, the young editor of The Spectator (well he looks young to me aged 55). It runs like this.

The general election had a few surprises. Why did some MPs crawl home and others like Graham Brady double their majorities? Why did Gisela Stuart (Labour) MP hold her seat in Edgbaston when she should have fallen to the swing? The answer is that voters notice if MPs believe in issues and fight for them. They like that. They respect it and if they share the MP’s beliefs they will vote for them.

This is a refreshing fact to counter all the allegations of slimeball politics, corruption and sell-out. There are many excellent MPs in Westminster, who we can rely on to do a damned good job of representing their constituents and fighting against the things they see as wrong.

Cameron may or may not be as evil or as lovely as commentators wish to see him. But he will have to take note of MPs who won’t knuckle under for the promise of an easy job, or who have the strength of charcater to withstand bullying tactics from the Whips.

Ed Miliband has given a surprisingly good speech this morning: free from all the junk language that his older brother has a weakness for. But he raises an interesting question:
Why did Gisela Stuart win in Birmingham Edgbaston?
Why did Karen Buck win Westminster North?
Why did Andy Slaughter win in Hammersmith?

Might it have been because all three of these politicians were, at one point, thorns in the flesh of their government? That they all at times campaigned, on principle, against the Labour government? As I said in The Times yesterday, the German-born Ms Stuart was a committed foe of the EU Constitution – who denounced it, and the Lisbon Treaty, as loudly as she could.

She shared platforms with Conservatives fighting it, she supported calls for a referendum on the Lisbon Treaty which she said would create a “democratic deficit”. Ms Buck withdraw her son from one of Labour’s flagship City Academies saying the standards there were too low and that her son had lost an “entire year” of education. Andy Slaughter has defied the government on Heathrow expansion. (That, and the local Tory-run council decided to take away secured tenancy on council houses provoking a massive backlash which conspired to keep Shaun Bailey out of the House of Commons – for me, one of the most disappointing results of the evening).

There was no uniform swing on election night. The British electorate rendered redundant the BBC swingometers. It was a victory for principled politics. Being a rebel, rejecting the party machine, seemed to protect you. Graham Brady, the only Tory to resign over a Cameron policy, almost doubled his majority and may well be elected to the chairmanship of the 1922 Committee (ie, chair of the Tory backbenchers) next week.

All this will serve to make life difficult for the whips in this coalition. Ms Stuart has herself issued advice to new MPs – many of whom will be very interested to learn the art of defending a seat with a small majority:
“Beware when a whip comes up to you and with a big smile, makes a friendly and helpful suggestion. Just ask yourself: why me and why now. If you can be bullied, you will be bullied. If you can be bought, you will be bought. If you stick to your guns, then they will respect you. But don’t expect too many favours.”

So why did Gisela Stuart win that night? Because she fought for what she believed in. The lesson will not be lost on the 232 new MPs who were elected last week.

Tomorrow morning early I head for the airport. I’m airborne for 14 hours and back in the UK by 11pm GMT Monday volcano permitting. I look forward to getting up to speed on political events on Tuesday, but Monday will be a blogging void. I’ve finished all my tasks out in Asia, and want to get home and see my family. I’ve enjoyed receiving comments from readers all the time I’ve been away, a bit of home from home.

This week the big story for me will be who wins the leadership of the 1922 Committee. They could have the power to make or break Cameron, and could stop the Party from drifting away from its core beliefs.

4 Responses to “MPs’ Salvation Lies In Their Own Hands”