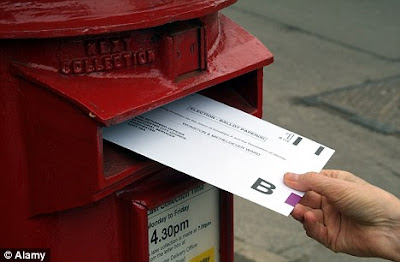 I travelled the day before the volcano grounded flights, April 14th. I was just in time you might say. I also filled in a proxy voting form after calling the helpline and being reassured there was plenty of time still to do so. It was sent to the local address as specified, but as yet, three days before the actual poll, the proxy vote has still not arrived back. That’s me disenfranchised you might say.

This failure could make a difference to hundreds of thousands of votes apparently and change the result of the election, as proxy voters will be busy people, who are employed and are more likely to vote Conservative.

The Guardian also reports that postal vote fraud is alive and well, as is harvesting of proxy votes by parties, which is even going on in Pakistan. If there is no party getting your proxy vote organised for you, maybe the request is simply being ignored.

It really is an almighty shambles, no doubt intentionally so. See Daily Mail report.

2 Responses to “My Proxy Vote Failed To Arrive”