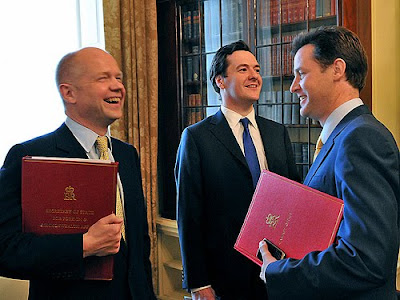 Here is the new mongrel breed of British politics, happily chatting in the moments before the inaugural meeting of the National Security Council. This is so British, you could scream. Where else in the world would you find former political foes working contentedly together, chatting and laughing?

No wonder all foreigners are completely confused. This could never happen in Germany, or France – or anywhere. It’s that old public school thing. Enemies on the cricket pitch one moment, friends in the science class the next, and in any case, the enmity is laced with large doses of humour to boot.

Britain has always been an immigrant nation, taking in peoples from all over the shop, and our culture has been designed to shake us all down together in five minutes with minimum fuss. Likewise our administrative, military and business ventures across the globe in the past, required an ability to shake down with total strangers, become as one, and weld into an effective team instantly.

No wonder the French are declaring financial and cultural war on us. This must be some kind of plot, in their eyes. How can power possibly be funny? We must be laughing at Sarkozy.

You know, I bet you that even Norman Tebbit, if he was in there, would be chatting and laughing along too. He’s trying to keep up a hostile blog, and sound off at ‘European’ Clegg, but his heart’s not really in it.

This is us. Britain as we are today. All those years of brooding anger and hostility from Brown, and the slimy spinning from Blair and his sidesmen is not us. Brits are straightforward, social animals, not bunker dwellers.

This is why this new mongrel government needs a new name to get across that this is a new departure away from the unnecessary nastiness of recent years. This is a new brand. Not quite the Old Contemptibles this time. But something equivalent. I’m stuck with calling them the Labradoodles as no one’s thought of a better name yet, the mixture of two breeds of dog.

Could someone help please?

This is not the Conservative Liberal Democratic Coalition, or The Change Coalition. It’s simpler than that. In truth this is the British National Party, where all sides of the spectrum are represented in harmony. I wonder if Nick Griffin would mind lending the name. Any other thoughts, readers?

5 Responses to “Mongrels R Us”