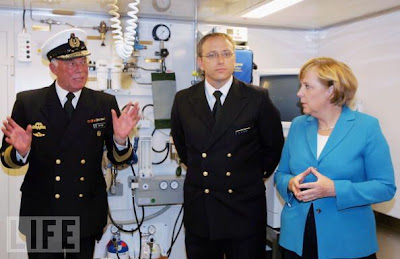 Angela Merkel has stretched every political sinew of her being, overriding German Treaty obligations, ignoring her own Constitutional Court and the feelings of her own people, to put together the biggest rescue package she could possibly aspire to, in order to bail-out the governments of the eurozone who are unable to raise finance.

The sum being raised is $1 trillion, no small sum, nicknamed ‘Shock & Awe’, kinda letting Americans know that Europe can do big deal things just like they can.

So what has been the effect on markets? Do they regard Greek, Spanish and Portuguese debt as low risk now, and are willing to lend once more?

The answer is NO. They don’t. Prices between low-risk and high-risk bonds are once more progressively widening, worldwide, not only in Europe, as stock markets and commodities go into a joint deflationary fall.

Money supply worldwide is falling. Credit is tightening, sending nearly all asset markets on a decline. European stock markets are falling equally as fast as American, regardless of the banning of naked short-selling by Germany.

Merkel cannot possibly counteract the effects of falling markets and shrinking money supply, no matter how much she tries to throw at them. The sums of money are simply too vast for a $1 trillion to make much difference to the big picture. And she only has $1 trillion to spare.

She says that the end of the Euro will be the end of the EU. That’s to justify the maximum effort being made to try and turn around the inevitable collapse. But it’s to overdramatise and is unhelpful.

The loss of insolvent countries in default from the eurozone, temporarily is only the end of the EU if there is not the political will to put it back together again. She can spend money any time she likes, but only political will can save the EU in the long run.

Somewhere inside she knows the answer, but denial is her preferred option. Germany does not have the will to rebuild the EU, if its economy crashes and splits it up. But Merkel is not ready to look beyond the EU. She has invested her reputation and all the political capital at her disposal in maintaining the current status quo.

It will be the next generation of European leaders who will define the future. It will be another German Chancellor who will be the first to talk of a Europe of independent free-trading national democracies. Merkel’s decided to go down with the ship.