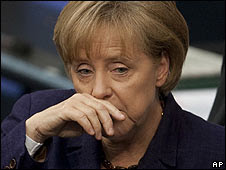 The title ‘Gotterdammerung’ is a translation into German of the Old Norse phrase Ragnarök, which in Norse mythology refers to a prophesied war of the gods that brings about the end of the world.

AFP quotes Merkel saying, “Governments must regain their supremacy over the markets, which they no longer have, and for that we need much stricter global rules.” She added, “It is a fight of policy against the markets. That is how I see it personally but I am determined – as are my colleagues, I am certain – to win this fight and we will be victorious, I am sure.”

Yes, Angela Dear. You smash the markets and the Euro will obliterate without any more help from you or anyone else. Quite brilliant. You will bring about the end of the Euro by smashing the economies of Europe. So much easier just to admit the whole thing was a mistake and call it off, but as we know from expeience, that’s just not Germany’s style.

Germans like big disasters, the bigger the better. Huge casualties. Many countries effectively destroyed, all in pursuit of an inhuman perfection. The Kaiser. Hitler and now Merkel. They’re all the bloody same, these Krauts.

ACTUALLY – I’m wrong. Ordinary Germans know that it’s madness spending billions to save the Euro. They are now voting for themselves against Merkel’s idealistic stance. See BBC here.

Merkel pledged that everything she had done was in order to stabilise the euro.
But behind some 2,000 party faithful waving the slogan “NRW must stay stable”, she could hear a constant barrage of boos, horns and whistles.

One man shouted: “Give the Greeks their drachma back.” Another held up a hand-written sign: “The euro is dead.”

Those voices remain isolated in today’s Germany. And whatever happens in NRW Angela Merkel will keep her job in Berlin.

But this state is seen as a political bellwether for national politics.
If the centre-right coalition loses the majority in the upper house, it would come under further strain as it tries to get opposition support for already slow reforms.
Others in Europe are also paying heed. As the chancellor and her supporters stand up to sing the national anthem, you can almost hear a historical chapter closing.

Twenty years after reunification, Germany feels it has paid its dues to the EU. It is putting its national interests first, like any normal European country.