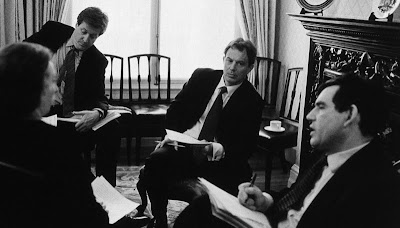 Electoral Criminals planning the dismantling of democracy in Britain. Their shadow will hang over us another five years.

David Cameron is doing his best to put together and keep going the coalition with the Liberal Democrats. What choice does he have?

But going back to the election results, they were a bit odd. No sign of any consistent national swing was discernible. Seats that Labour should have lost with ease, they held, but other outlier seats that needed large swings against them were lost.

To my mind that is evidence that the postal voting programmes which were put into use taking the numbers again into record territory were the cause of these strange statistical outcomes. I said so at the time on Political Betting comments, when challenged by other commenters to substantiate my claims that labour were planning a wide-scale programme of electoral fraud to swing the result of the election, just as they had done in 2005.

The overall statistics were consistent with my theories for the 2010 election, but today I read that there is already one seat which looks as if the result, saving a Labour MP in a marginal constituency was obtained by fraud. This looks likely to be true from the report in today’s Independent on the marginal constituency of Halifax.

Police are investigating allegations of electoral fraud in Halifax after thousands of postal ballots were delivered by hand to polling stations on day of the general election.

More than 4,000 ballots arrived in the West Yorkshire town on 6 May, with the majority being delivered directly to polling stations. Although there are no rules forbidding the delivery of postal ballots by hand, such a large number arriving on the day of the election itself is considered unusual and risks overwhelming the already-stretched safety checks aimed at minimising fraud.

Local Tory officials raised questions over the validity of some of the postal ballots after they discovered that a number of empty and derelict addresses in one particular ward had voters registered to them. They allege that Labour Party activists spent the days before the election “farming” postal ballots to deliver directly on 6 May and have asked both the police and the Electoral Commission to investigate.

I would hazard that this was not an isolated case. If another twenty seats were similarly fixed, as seems most likely, that means the election result was obtained by fraud.

We are living in banana republic. The judge was right.

Officials at Calderdale Council, which covers Halifax, say the signatures of every single postal ballot that arrived on the day of the general election were checked throughout the night. But Philip Allott, the Conservative’s candidate who lost to Labour, says the current vote-checking system cannot tell whether someone has voted multiple times using more than one postal vote.

“It is possible in Calderdale to apply for multiple postal votes because although the signature of the application form and security slip when the person votes are cross-checked via scanning, the scanner does not check whether the person has voted twice or more,” he said. “We can’t say for sure whether fraudulent voting affected the outcome but I do believe there is enough prima facie evidence to show that fraud happened. It’s simply not good for democracy when this sort of uncertainty exists.”

The Conservatives in Halifax say that they cannot afford to launch a legal challenge which would need to be submitted by tomorrow. Mr Allott said the rules stating that complaints have to be launched within 21 days of an election meant there was not enough time or money to gather evidence.

So none of it will come to light. Perfect.

But if Cameron sorts this out, and equalises the constituencies, that must be worth 100 seats next time round. He wouldn’t need any partners.

That said, in the meantime, he’s managing to decontaminate the Tory brand by the biggest dose of Liberal Democrat love-bombing imaginable. If The Lib Dems were to storm out of the marriage, however, claiming that the partnership was over, Cameron will need all the votes he can get.

It would be nice if British elections were once again decided by voters and not by targeted and systematic fraudulent electoral practices. 2005 was little different with 4 million postal votes, doubling previous numbers with no controls, but no one dared squeak that Blair’s third term was cheated. The media were entirely compliant and under the Campbell cosh, which they don’t seem to be now. Having Cameron in Downing Street seems to be loosening their pens once more.

For that we must be grateful. He sprung the trap set by New Labour ‘election planners’ by the narrowest of margins. In many ways 2010 was a miracle. With all the dice loaded against him, Cameron somehow pulled it off. The Lib Dems would undoubtedly have teamed up with Labour if they had held a joint majority, and that was stopped by the tiniest of margins. Clegg would be singing a very different tune, and fraud would no doubt remain as the basis of the way that Britain selects its governments. I take it as a given that next time the game will be up.

QUOTE – As one Labour activist told me, the plan was to cling on by dragging their supporters out by hook or by crook

COMMENT – more crook than hook, I’d say. Postal voting fraud was widespread in London and other marginal seats. Labour lost outliers where they didn’t bother with ‘by hook or by crook’, but won marginals where they did.

Just tidy up the postal voting cheating system which decides the results of British elections, and otherwise keep going. No need to pay another media guru a fortune.

Tapestry said…
There are 5 million British citizens living overseas, of whom possibly 3 million are eligible to vote but only 20,000 voted in the election or thereabouts. These votes could be encouraged to come home and help us in our hour of need. Most would be Conservative.

Tapestry said…
By the time the constituencies have been equalised, postal voting and proxy voting are brought under control, and you encourage the overseas vote, Cameron would win 100+ seat majority with a vote as in the latest election.