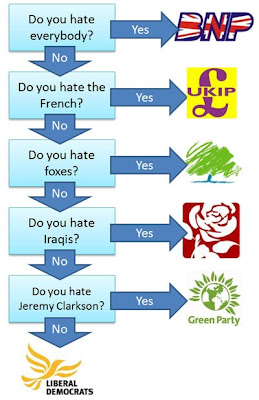 Political Betting are a Lib Dem supporting site. I don’t get Lib Demism myself and so am grateful when a Lib Dem apologist can shed any light on why anyone might want to vote for them. This chart tells me a lot, and it’s much as I suspected. There is no emotion in Lib Dem political beliefs. In fact it amounts to a cancelling of human emotion.

As I always suspected, Lib Dems hate and therefore love nothing. They are like the blank screen of a TV with the power off. A vision of nothingness for themselves, yet equally motivated to stop others from expressing or feeling anything. Their colours, this means, should be changed from yellow, to grey.

Yellow is a bright cheeful colour. There is nothing bright and cheerful about Lib Dems. (Yellow throughout history, on the other hand has been used as the colour of treason, and cowardliness – ‘yellow-bellied cowards’ from the US civil war e.g.)

They used to portray Major as grey in Spitting Image. He, of course, should have been in cricket whites. Clegg, though, is the ultimate in greyness. There is no depth or shallowness about him, just nothingness, a soul lost in a void of personal ambition without any strong feelings one way or another about anything – well almost anything! 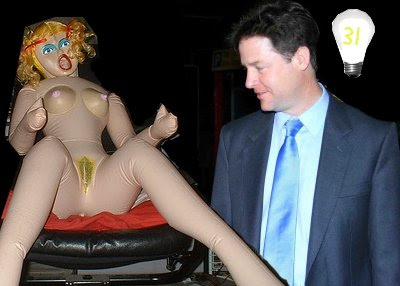 Those who endorse the Party have the most extraordinary reasons for doing so.

The Observer summing up of their LibDem endorsement is quite potty.

“The Lib Dems have in recent years developed a habit of getting things right. They were first of the big three to embrace environmentalism, first to kick back against the assault on civil liberties, alone in opposing the Iraq war.”

Also Lib Dems were first to back the Euro, first to suggest an amnesty for illegal immigrants and for Britain to comply with an EU immigration policy, and the first to break their promise to hold a referendum on Lisbon. So much of our civil liberties. As long as it’s EU-backed, we will be getting it. That is Clegg’s one and only policy.

For several more years of economic hopelessness, rudderlessness and ego politics, vote for Clegg. Be prepared to feel nothing about anything, and endure years of political bureaucratic anasthaesia as we are sucked into a vortex of european economic collapse. It will be sheer hell, but we won’t feel a thing, just a dull nothingness, caused by a sense of inevitable resignation as the corrupt and the over-powerful encroach further and further over our freedoms.

Only the totally dull and unfeeling could imagine this to be a good thing. Anyone with a modicum of human spirit would be screaming in the streets and the corridors, while freedoms and opportunities are eliminated.

Or we can go Conservative, fight off the bureaucrats and the quangoes and energise once more. Feel not forlorn hope, but the thrill of battle joined. That’s where the real money is going this weekend, a dash for freedom. A dash to Cameron, to the Conservatives, the right to be heard once more.

Clegg can take his anaesthesia elsewhere. I am sure he will find many more willing to have their minds dumbed down to blow up doll level.