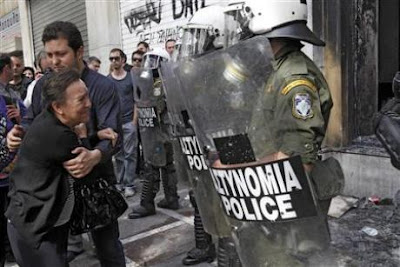 In amongst all the chaos and crisis of the Greek economic and political situation comes a voice of common sense. Greece has to be given a way out, or the depression in that country will be beyond anything that Europeans should find acceptable. Greece simply has to quit the Euro.

The piece below came to me via Coir Campaign, the folks who tried to stop the Lisbon Treaty in Ireland. You can feel yourself relax a lttle reading what amounts to a suggestion of common sense. The Euro is not the priority that Merkel says it is. People’s lives and livelihoods are.

In an exclusive interview with Executive Intelligence Review, Prof. Joachim Starbatty says that as soon as the German government issues a bill for participation in the Greek bailout, four professors “will proof the text and immediately act,” to file a constitutional complaint agains the EU bailout policy. If the Constitutional Court supports the complaint, “this will create a dynamic situation. This means that an exit of Germany [from the Euro] is not excluded.” If this happens, other nations would follow, giving birth to “a new, stable bloc,” he said.

The EU intention to introduce a control mechanism on national budgets amounts to “the development of the EU into a quasi-federal state through the back door. This conflicts with the ruling of the German Constitutional Court on the Lisbon Treaty,” Prof. Starbatty says. Article 136 of the Lisbon Treaty, used by EU leaders to back their intentions, “is no basis for a transfer of political competencies. The Bundestag must express its opinion on that.”

Prof. Starbatty exposes the shock therapy to be imposed on Greece as “fatal.” He added: “It is like German Chancellor Brüning’s policy in the early 1930s: in a severe recession, to cut expenditures, increase taxes, freezing and cutting wages. Brüning did that in order to gain reputation on the international capital markets. The Greeks are currently in a similar situation. No other industrial country carries out this Brüning-like policy because it leads from a recession to a depression.”

Instead, Greece should leave the European Monetary Union (EMU) and its “Euro-debts should be cut down according to the [currency] devaluation. The banks should participate in the consolidation; they consciously took a high risk.”

German political leadership of Europe is not working. In fact it has failed. The sooner that fact is realised, the sooner the next steps of bringing the continent back from the brink can start. In the long run, the Euro hardly matters. It is stopping a depression from taking root, and enabling countries to trade and cope with the real world, that matters, not some badly-planned fantasy, left over from a debt-fuelled boom, which is now most certainly over.