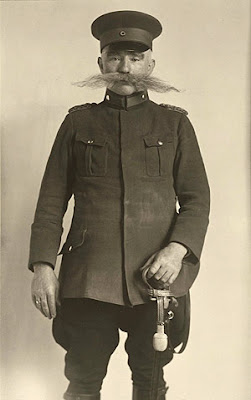 France and Germany are drifting apart. At the moment of EU seizure of political power, with the announcement of the bail-out expressly forbidden in all the Treaties, France is triumphant. Her idiotic ministers go on air stating that the bail-out is 95% on French terms, when they must know that 80% of Germans are furious at being made to pay up for the profligacy of the PIIGS.

The German people are wakening to what the EU really means for Germany. Their way of running their economy, their political culture is being overridden, and they are the ones being asked to pay for it. This almost goes back to the Treaty of Versailles, where Germany was humiliated by the allies. That was a foolish decision, it might be said in retrospect, as it went a long way in helping cause the next war.

Here again we find a decision which humiliates Germany being carried out by an alliance, of which Germany is a part, but with French leadership, acting with American support. All the terms of the Treaties agreed to by Germany forbade bail-outs. The single currency was to be the DMark or not at all in German eyes. Now it is becoming the Drachma. As ususal in the EU, the lowest common denominator prevails. Germans are more than furious.

“Anger and denial are hardly surprising. Germans were promised that the single currency would be the old Deutschmark in new clothes, backed by Teutonic discipline and a fiercely independent central bank. Arguably, that fantasy Deutschmark died early on May 10th, when a euro-zone bail-out mechanism was agreed and the European Central Bank started buying government bonds by the bucket load. Germans are now in mourning. How they recover is not just their problem, but Europe’s”.

A leader in the IHT argues, “Now, at the worst possible moment, Germany is turning to nationalist illusions.”

Die Welt reports that a new poll for ARD has found that 78% of respondents are dissatisfied with Angela Merkel’s performance as Chancellor, and only 20% are satisfied.

The political stitch-up of Germany in 1918 only needed an economic collapse to make it dangerous. I am not saying Germany will revert to militarism to solve her problems this time around, but a growing economic crisis seem assured, as all the bail-outs in the world are only going to be of temporary effect. The debts built up over the last twenty years are gradually grinding all optimism down. The financial crisis has years, not months to run.

Germany must take the bull by the horns. When Merkel goes, the next German political leadership will be far more nationalistic. There will no doubt be some kind of German Thatcher. But that will be OK. It will take strong leadership to undo the mess of the EU in triumph and yet unable to fix itself. Without Germany stating clearly her preferences, no settlement of Europe’s troubled political economy will be possible.

No wonder David Cameron is playing the Europe issue cautiously. The EU is a German problem and only marginally a British one. If Germany moves towards EU separatism, there will need to be good relations between Britain and Germany. A new consensus would be the ideal way forward, not an unnecessary falling out over the failure of the EU. As for the French you can only guess at the bitterness in their political elites when their domination of European politics came to an end. The future course of events will be decided in Germany. London’s wish to separate is part of the picture, but peripheral. 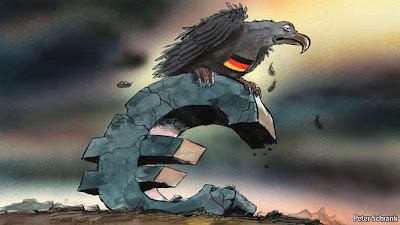 From Charlemagne, The Economist –

In Germany’s defence, some other EU leaders are hardly helping. When France’s Nicolas Sarkozy crowed that the euro-zone rescue plan is “95% French”, he was thinking of poll ratings at home, where voters like to hear that the French are running Europe. But this is a “very dangerous” strategy, says a politician from a third country, because it pushes Mrs Merkel into a corner.

Mr Sarkozy dreams of building a new power structure round the 16 euro-zone countries. But Mrs Merkel wants economic policy to be decided by all 27 EU members, precisely because she likes to balance “Club Med” members of the euro zone with more liberal countries, including Britain, Sweden, Denmark, the Czech Republic and Poland. Yet David Cameron, the British prime minister, is adamant that deeper economic co-ordination in Europe must affect only the 16. That may be savvy British politics, but it risks pushing Mrs Merkel into France’s arms.

In this euro crisis, Germany’s leaders sound not so much indecisive as stuck. Their headache comes from trying to save the euro without enraging their voters. So far they have reacted with populist attacks on speculators and much angry rhetoric about discipline. But both approaches carry risks that they seem reluctant to acknowledge: that they may end up fuelling German voter rage as well as angering the rest of Europe. 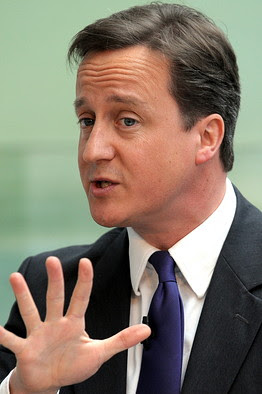 Anger spills everywhere. Something will have to give. Cameron is right to keep separate on the crucial issue of economic governance, while using EU-loyal rhetoric to frame his move. This angers British Ukippers. It’s a small price to pay. 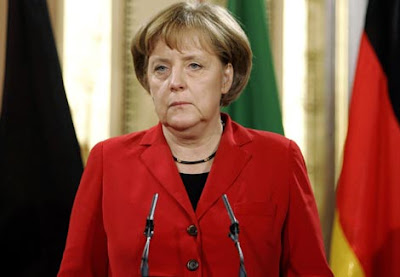 On the international stage, Merkel, 55, has been criticized for dragging her feet for months over a bailout package for Greece and being too focused on German national interests.

“For months, Mrs. Merkel resisted all appeals – by other European leaders and Washington – to, well, be a European leader,” The New York Times wrote in an editorial Wednesday.

On the same day, EU Commission president Jose Manuel Barroso criticized Germany for its role in the euro currency crisis and said it would be “naive” to believe that EU treaties could be changed according to German wishes without other nations wanting amendments as well. Barroso was referring to Germany’s insistence that European Union treaties be changed to allow tougher sanctions for countries that have excessive government debt.

In an interview with the German daily Frankfurter Allgemeine Zeitung, Barroso said “our union needs Germany in a leading role” and added he wants to see Germany “speak up for Europe. Otherwise, we have a problem.”

Concerned about German state elections in North Rhine-Westphalia in early May, Merkel had tried to postpone a decision on the Greek bailout until after the election. In the end, her European partners pushed her into supporting the rescue package just days before the election – which Merkel’s party then lost.

“This (behavior) shows a fatal German inclination for isolationism that one had thought belonged to the past,” German daily Tagesspiegel wrote in an editorial Saturday. “This does not only make our partners suspicious of us, but is also completely senseless in today’s globally connected world.”

Now, like her colleagues in Greece, Spain, Britain, Portugal and Italy, Merkel is struggling to prepare a worried populace for budget cuts. The chancellor has already scrapped plans for promised tax cuts, but still faces a huge federal budget deficit. Her government is going to decide on spending cuts and, possibly, even on tax hikes within the next 10 days.

“For weeks, you’ve tried to sit on the fence and not get involved,” opposition leader Frank-Walter Steinmeier of the left-leaning Social Democrats scolded Merkel during a parliament debate about the Greek rescue package. “You’ve let things slide and now that everything is ablaze, you’re calling for the firefighters to solve the problem.”

Domestic critics have noted repeatedly that her new coalition has accomplished little in the seven months since it took control. Her popularity among Germans has plummeted by 10 points to 48 percent – her worst showing since late 2006.

Opposition lawmakers accuse the chancellor of lacking any vision or leadership when it comes to essential issues like an aging population, integrating immigrants into German society or tackling the question of whether to continue using nuclear energy.

Merkel has not responded directly to the criticism and her office could not immediately be reached for comment Saturday.

The chancellor’s unilateral ban earlier this month on naked short-selling of eurozone government debt and shares of major financial companies received praise – but also criticism, because she made the decision without consulting the 15 other nations that share the euro currency with Germany.

“Germany is still the most important economic power on the continent,” Tagesspiegel wrote. “But while other powers used to look at Merkel for orientation … today she seems to be confused and changing her position according to the influential powers around her.”

Germany might be inclined to isolationism, but even more so, I would say to denial of reality. If Germany wants to be called a modern state, she has to look ahead to the post-EU scenario, and set up new structures for European international relations. Merkel is quite obviously not going to look beyond the current structures, and think ahead from where we all are to where we are now going.

Come to that, neither is Barack Obama on the right track here. They all have to think of a post-Euro, post-EU scenario. It’s not impossible.