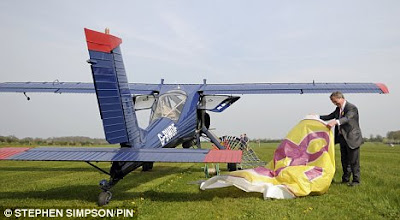 UPDATE 4.32 pm – Despite being in considerable pain, we deduce that Nigel is back to something like his normal form. He told Ukip’s Banbury candidate Dr Sebastian Fairweather, who gained access to him in hospital, to “stop worrying about me, get back out there and get out the vote”.

We also understand that the injuries to the pilot, Justin Adams, may be less serious than previously feared, though we have been unable to speak to his family. It is clear that both men had a remarkably lucky escape.

UPDATE – might be worse than initial reports suggested.
Political Betting comments –
Nigel Farage is being x-rayed after slipping in and out of consciousness – after his crash this morning. I hope he’s alright. Sounds bad. 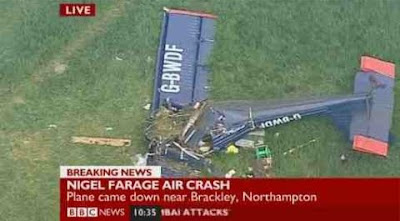 Nigel walked away with broken ribs (according to one report), with minor head injuries yet covered in blood, according to another. The pilot is taken to a spinal unit after being cut out of the aircraft. What happened?

The aircraft was left upside-down following the accident, and reports suggest a banner being towed behind the aircraft became wrapped around the rudder after take-off.

UPDATE (earlier) – It sounds like an accident this time.
Phew!. It sounds like the UKIP banner trailing got caught in the tail fin, or there was a cross wind. I am reserving judgement until a proper report is filed. Surely these devices have been perfected years ago to the point that they don’t threaten the aircraft.

This is an old fashioned device nowadays, which has been in use since the 1920s. You can even have night-time light-flashing messages for your wedding or party.

Not another eurosceptic getting the Polish treatment is it?

It’s just too big a coincidence how the enemies of the EU keep getting chopped. Airey Neave. Pim Fortuyn. Jorg Haider. President Kaczynski. It’s almost a full house. Farage must win Buckingham. That’s what the ‘assassins’ will no doubt be trying to prevent.

So far it does sound like an accident, and yet how many ‘accidents’ are we required to believe in before we are allowed to become sceptical.

I hope the pilot and Nigel Farage make a full recovery.

To cheer us up, watch again how Nigel Farage tells Von Rompuy he is no President as far as British citizens are concerned. Wonderful stuff!

Did they launch the banner too soon after take-off? Or was it not rigged correctly?

This is not the first time that this type of aircraft has had trouble towing a banner according to Air Acccidents Investigation Unit.

Extract from report from October 2006 on similar aircraft towing banner –

The aircraft had completed a banner towing operation and was returning to land. The banner was dropped uneventfully but as the aircraft climbed and turned left to enter the circuit the pilot heard a thump and felt the aircraft ‘stagger’ in the air. Control response was normal; the pilot made an abbreviated circuit and a normal landing. After landing an inspection showed the pitot tube had detached and the right front wing spar had broken.

From wire report: Eyewitnesses told how the pilot and Mr Farage were in the front seat of the plane when it banked and the promotional banner became tangled around the tail fin causing it to plummet to the ground.