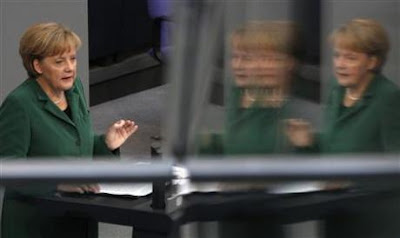 The situation surrounding the Greek bailout is getting worse. It’s hard to take in the effect that this is having, as there are so many knock-on results to the Greek industrial strife and political collapse with the Greek Conservative opposition refusing to back the government.

Countries such as Slovakia are unwilling to agree the bail-out if Greece won’t agree the austerity package. Spain and Portugal are starting to wobble. It seems almost impossible that this can end in any way other than tears.

Merkel is starting to issue warnings and so is the IMF. The world will have to face reality. The Euro cannot survive as it is. Once that admission is made, and Greece is allowed to devalue, possibly to rejoin the Euro later, there might be some kind of a reprieve. But meanwhile the day before Britain goes to the polls, the situation in Europe is going right into the red zone.

Nick Clegg, are you sure you want to advocate Euro membership for Britain? For all the useless things Labour have done to us, at least they kept us out of the single currency.

This Reuters report gives a good assessment of where things are at, and it’s bad, worse than you could probably imagine, for all the face-saving formulas, meetings and public announcements. This crisis is full-on.

And what traders are really saying –

I think what really spooked traders was that, even after the three year rescue plan was announced, two-year Greek debt was still yielding over 10%. This was a clear sign that the markets do not believe that Greece can stick to its austerity measures. Germany has already said that, if Greece does not stick to its budget, they will freeze their portion of payments.

This is the question being asked in every trading room across the world right now. It’s the reason we are seeing the US Dollar and Treasuries rally (safe haven buying is pumping up both markets right now).

The higher dollar ravaged commodity prices yesterday. We saw front month crude get knocked almost $4 lower to $82 and change. Copper got smacked down to $3.17, and gold got bushwhacked for almost 12 bucks down to $1,171.

If this flight to quality continues, you want to be long Treasuries and the Dollar, and short commodities. The commodity story, while not dead, is certainly going to come under pressure as it faces the impact of a rising dollar, a weaker Europe, and a government-led slow down in China. It’s difficult to see how commodity prices can push higher against those types of headwinds.

The Greeks are rioting in the streets. What will we do when the Spanish, Portuguese, Irish and Italians all take to the streets? Do not underestimate the extent of social unrest that we could see rip through Europe.

Maybe good idea to vote Conservative after all. And get that IMF audit done. Labour have hidden the true level of borrowing. Niall Ferguson wants an audit – NOW.