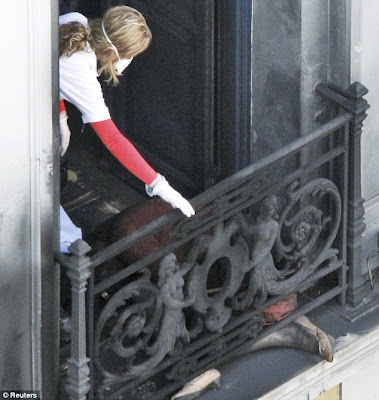 Three Greek bank employees died in a fire started by demonstrators yesterday. Here is a dead woman being moved out by a medic. These are the first casualties of the Euro. How many more will die trying to hold together an impossible dream?

It is madness not making Greece devalue and help her to re-establish the Drachma. That would be worth spending money on, as it would be a solution to the problem. A bail-out is only a sticking plaster, which will bring on appalling political consequences across the continent.

It’s time for Germany to face her responsibilities and help countries to leave the Euro they should never have joined. How many more weeks will pass before reality dawns? And how many more pitiful sights like this? One is enough.

“Flames tear through another bank targeted in the financial district”

“Several other buildings were also set alight during extensive clashes across a broad swathe of central Athens […] They included the finance ministry in charge of the austerity programme.”

While portraying the resistors as not caring who they endanger or kill (anyone who’s been in a riot anywhere will know that’s total bullsh**), the ‘Daily Mail’ forgets to mention what the austerity measures will actually entail.

It’s great to see that people in Greece have got some fight in them.

In Britain, when ‘austerity measures’ get imposed here (for the same reason as in Greece – to help finance capital), most people will lap it up. Any criticism will be focused on whatever the media focus it on. Then David Beckham will say this, that or the other. The ‘education’ system and general culture has made sure that most people are as thick as two short planks.

The level of mindlessness in Britain is higher than in any country I’ve experience of, Sweden and Norway excepted. 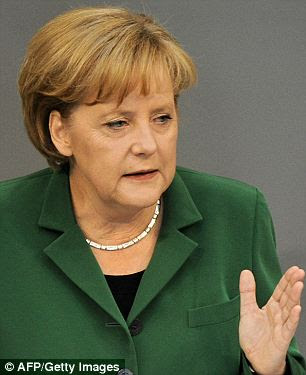 Michael is right. The EU has its eyes set on British capital to help save the Euro. The austerity programme will be savage. We should get shot of the EU before they drag us down to their level.

German Chancellor Angela Merkel urges the Bundestag this morning to approve the £19bn rescue package. ‘Nothing less than the future of Europe, and with that the future of Germany in Europe, is at stake,’ she said.

There you’re wrong, Angela. Nothing compares to the shocking level of desperation your Euro dreams are bringing to hundreds of millions of people across Europe, as you gradually collapse the financial system. Politics is not the be all and end all of life. EU Aparatchiks believe politics is all. People have other needs which come higher than belonging to a uniform monetary system.

TODAY’S TECHNICAL ANALYSIS ON THE EURO –

Euro: An interest rate decision from the European Central Bank headlines the economic calendar in European
hours. The outcome is unlikely to produce any significant changes with inflation well below the 2 percent target
level and economic growth showing signs of slowing momentum in the first quarter.

Instead, all eyes will be fo-
cused on ECB President Jean-Claude Trichet’s press conference following the announcement, with the central
bank chief will sure be grilled about Greece as well as the implications of any future bailouts for monetary policy.

In fact, some analysts are already suggesting that the Euro Zone may opt to inflate its way out of debt by slash-
ing borrowing costs and resorting to quantitative easing should a major member state succumb to sovereign risk
concerns.

The Germans are just gonna love that.