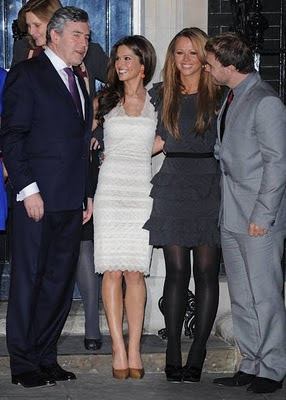 Brown had his young female admirers, Cheryl Cole, ‘the world’s sexiest woman’ among them.

Look at the MORI age and sex breakdown of voting at the General Election. The striking thing is how many women voted Labour, compared to men in the 25-34 age bracket, with Conservative holding an 18 point majority amongst men, while they had an 11% deficit amongst women. One commentator on Political Betting said –

Breakdown of marriage and families leads to the state taking the place of the husband. Hence cultural marxists waging war on the traditional family for 50 years as it leads to a dependent female vote.

That may be a little cynical, but there is no doubt an element of truth in the fact that the State favours women and children over men, who yearn for more independence.

The other point about the female vote is that the Lib Dems polled more votes amongst young women than Conservatives, with Clegg holding a majority in the youngest age bracket, level in the next and only a small deficit in the next, putting Clegg on a par with Cameron through the youngest three age brackets on 90 apiece, with Brown leading on 97.

Only older women gave a clear 2-1 majority to Cameron. They were also far more likely to vote than the youngsters as the turn-out figures show.

The question in many peoples’ minds is why did Cameron agree to the TV debates in which he must have known that Clegg would score well, particularly with the young ladies. And he did seem to rather pull his punches in the first debate, many felt, almost allowing Clegg to shine to the maximum extent.

The figures tell you the answer. 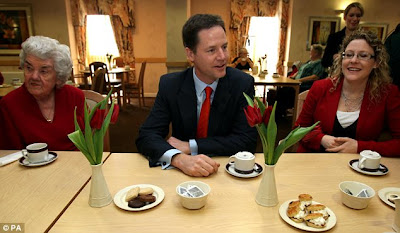 Clegg does it for the girls, but the over 55s were not so impressed.

What a good idea to let Clegg loose on these voters on TV, and deliver a targeted Cleggasm into Brown’s strongest sector of support.

With Brown leading with women, this was a shrewd move, and is probably why Brown is no longer in Downing Street, and Clegg and Cameron are. Lord Ashcroft is off the mark suggesting the TV debates were a mistake for Cameron. In a contest in which he stopped Labour by a wafer, this was the master stroke. It’s all in the figures!

2 Responses to “Did Clegg Score With Brown’s Women?”