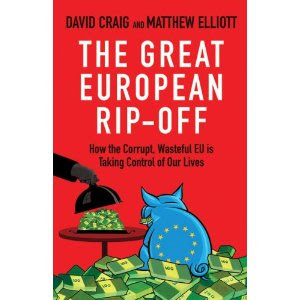 This morning’s title being promoted by Amazon. The basic story never changes.

It is now possible to get some idea of the current state of the Liberatory coalition from reading around the media, and the prognosis right now is not good.

Stories of nil social contact between Conservatives and Liberal Democrats in The Times today don’t lend much encouragement, but, in themselves, are hardly fatal. But the effect of Clegg expecting to basically demand compliance with his economic and taxation policies, and the retention of The Human Rights Act, is, on the other hand, likely to keep relationships strained at the top. He is laying down a very hard line as regards policy compliance with the Liberal Democrat viewpoint.

This coalition came about through the results of a single election. It wasn’t planned in advance and had to be cobbled together at great speed. The problem for its stability is that another election may not require its continuation. It is in reality, and will no doubt be seen as a temporary fix by all parties, but especially by Clegg.

Clegg already sees great advantage from it. He’s been projected from a position of minority to the forefront of power, and can only see gain from hereon. If he acts as a totally equal partner, or even dominant partner, in the coalition, demanding and getting his way, his status can only rise, and that of his Party.

He needs to invest nothing in the relationship for the longterm, and in fact the less cooperative he is with Cameron, the more he will be seen as lionising the left wing’s agenda, and the more he can shout off his mouth and make claim in future electoral contests.

Cameron on the other hand can only lose in the short term. The more he concedes to his junior partners in the coalition, the more he will be seen as weak, and the less he can present himself as a strong and reliable leader in any future contest.

That said, he must be pleased to have enough control of power to get some things tidied up, from the point of view of elections, and future voting. The constituencies are rigged heavily in Labour’s favour, not to mention postal voting. These all need tidying up if democracy in Britain is to mean anything at all.

The trouble is that he might need to call Clegg’s bluff to be able to settle this relationship down. It’s no good conceding endlessly to Clegg, as Clegg is, apparently, not too worried about going to the wire on any issue, and bringing the government crashing down would not really bother him, one suspects. But the longer the coalition lasts, the more the advantages that will accrue to Cameron, and the less to Clegg and the Liberal Democrats. At the moment, with the Cleggasm fresh in peoples’ minds, and Cameron keen to bed in the coalition, the LDs can play hardball, and get away with it.

Cameron will have to tread a very tricky line. He needs to keep the ship afloat longer, while suspecting that Clegg is just as likely in the game for short term advantage. Clegg nearly achieved a breakthrough in the general election, and he will be looking to see if he can bounce himself from where he’s landed into a commanding electoral position at the point when the coalition fails, which it inevitably will. He does not give off the air of someone who’s in this for the long haul, it has to be said.

Cameron knows his position is currently weak, and that he too must already be keeping an eye on any future electoral contest. He cannot play games of brinkmanship with the EU, or present Clegg with an ideal reason for a falling out, which he can take on patrol around the country.

If Clegg won’t parley, standing firm on an issue is a risk Cameron will, at some point, have to take. It is impossible for Cameron to make a longterm partner out of a shortterm thinker. The scent of more power is in Clegg’s nostrils, and he won’t allow any advantage to land in Cameron’s court if he can help it.

Clegg believes that by playing the EU’s stool pigeon, he can outplay Cameron. It’s going to be a very tricky patch indeed for Cameron. He needs to play a steady hand, keep the ship level, and wait for Clegg to overplay his hand, or to leave the public underwhelmed, compared to his impossibly perfect sales pitch for power. ‘Cleggasm’ is inevitably a short term game, and as the weeks slip by, the lack of depth should start to show, and, as the essential arithmetic of EU membership grinds us down, Clegg’s EU loyalty will count against him.

AFP reports that German Finance Minister Wolfgang Schäuble is pressing for the EU to go ahead with a tax on financial transactions if an agreement on a global tax cannot be reached.

He told a German parliamentary committee that “If we can get that through on the global level, then good. That would be ideal. If that does not work, then we must look to the European Union.” He added, “And if we have a problem with Britain, then I think we should try it with the eurozone.” In an interview with the FT, Schäuble said that it is “very likely” that there would be no agreement at the June G20 summit in Canada and “then the debate will take off again to see if it is possible to do it in Europe.”

The frontpage of Handelsblatt reports that German Chanchellor Angela Merkel has made a dramatic U-turn on the introduction of the tax. The article notes that as late as Sunday she was still against but yesterday she said “taxation is needed, whether it is a financial activity tax or a financial transaction tax”.

Can you imagine how far back this will send investment in Europe? I would immediately set up a company in another location and trade finance from there, as would millions of others. These EU folk are going round the bend, it seems.

Nick Clegg ought to take note, switch sides, and get onto the safe ground, if he wants his meteoric rise to power to continue. Cameron could afford to take a little more risk in that regard too. He might be surprised at how soft the Clegomaniac support of all things EU really is. Why would a power-hungry rat keep sailing on a sinking ship?

Peter Oborne in The Mail sees a different outcome –

The spending cuts which are now inevitable in the months ahead will prove deeply unpopuar and divisive.
Bitter arguments are certain to break out between the coalition partners over where the cuts should fall.
Meanwhile, both Cameron and Clegg are likely to face ever more mutinous party members.
Nevertheless, yesterday’s joint manifesto gets them off to the best possible start.
And the possibility that a new political party – the ‘Liberal Conservatives’ – will emerge from the stunning events of the last two weeks should not be ruled out.