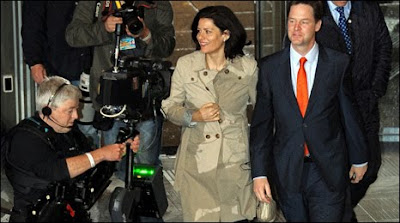 The DUP in Ireland have 8 MPs, and they are willing to join a coalition government. If the Conservatives can get close to 326, these 8 could be crucial.

Right now there are 286 Conservative MPs, but there are still 50 seats to declare. Maybe they will get 310 as stated by Conservative Home. That is still not quite enough.

Gordon Brown, though would find it very hard to form a coalition government. If he added his 235 to Lib Dems 50 to make 285, they would need another 40 from the remaining 50 which seems unlikely.

Hopefully a coalition would be just out of reach for Gordon Brown, even with a celtic fringe in coalition.

A coalition might just be in reach for the Conservatives even without the Lib Dems, but would they want that?

This report from the DUP –

The DUP’s Jeffrey Donaldson struck a conciliatory tone on any potential deal with the Conservatives as he romped to victory in Lagan Valley.

Mr Donaldson beat off competition from Daphne Trimble, the wife of former Ulster Unionist Party leader David Trimble, defending his seat with 18,199 votes, but with a reduced majority.

At the Lisburn Count Centre, an elated Mr Donaldson said the DUP would be open to talks with whatever parties are in a position to form a government.

“We will talk to them, we’ve made clear that our number one priority is protecting public services, protecting the block grant in Northern Ireland,” he said.

But that said, a coalition between Conservative and Lib Dem will start to look very attractive compared to slugging it out at Westminster with a tiny majority dependent on the Celtic fringe.

Mandelson, operating in open disloyalty to Brown, is desperately trying to put together a coalition with the Lib Dems, but he would require most of ‘others’ too to get there, and this would probably be just out of his reach depending on the final arithmetic, which won’t be known until tomorrow night. Let’s hope there are no last minute adjustments made to ballot boxes to bring Mandelson what he desires.

The significant others would be the SNP, Plaid and the DUP. These would be unlikely to all join Labour in an easy coalition.

Labour clearly hoped that Lib Dem/Lab would hold an absolute majority, with the Lib Dems making up the ground lost by Labour. But the Lib Dem flop has been the big surprise of this election, and Cameron’s great achievement. He has added 100 MPs. The Lib Dems have lost a couple.

Suddenly the Celtic Fringe are looking like the real kingmakers, who could hold the balance of power.

This is coming down to the wire.

With these pressures, I think it inevitable that he will be interested in joining a Conservative-led coalition, once he’s slept on it. What would be the point of keeping Brown in government any longer?

The terms of a Lib Dem Conservative coalition must surely come in a day or two, and include an electoral agreement to tidy up the voting system. But it won’t be PR, I doubt.

In a roundabout kind of way, Cameron’s done it. He’s finally got rid of Brown. But will Clegg and Cameron work together well? That will be the next question.

2 Responses to “Brown Is Out.”