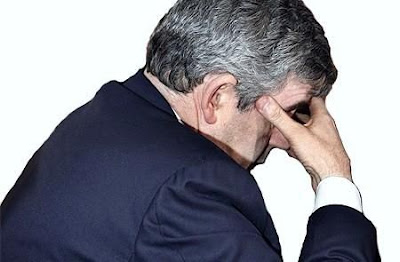 Cheryl Cole has been chosen the FHM world’s sexiest woman two years in a row. Not bad. But why does she keep choosing to grant her favours and backing to the world’s greatest losers? Take her husband, Ashley, who’s been chasing other ladies around pretty much ever since.

OK, love can have strange effects on even the most intelligent of people.

But her choice in politicians seems equally erroneous. She said she finds David Cameron creepy, and thinks that Gordon Brown is much more convincing!

Yes. Right. Especially when Elvis is singing The Wonder Of You, or he’s beating up his media assistants, because he’s just gaffed on live TV.

Why get involved in politics anyway, Cheryl? You only upset people.

From Gordon’s point of view, at least somebody still loves you, mate! What with having the world’s sexiest woman as a loyal fan, things can’t be that bad.