In the debate last night Cameron went one step down the road of making the EU an election issue, by pointing out that the other two betrayed their promise of a referendum on the Lisbon Treaty. He didn’t bring up Lib Dem support for the Euro, and nor did he make any fresh statement about repatriating powers and renegotiating.

But you can be sure of one thing. The focus groups will be working today to see if the EU might have any traction for him as an election issue. Clegg is far more vulnerable than Brown on this, being pro-Euro and openly supportive of EU federalism, while Brown has played his cards closer to his chest.

If the issue does have any way to help Cameron to bring Clegg down a peg or two, the temptation to use it will be great. Cameron could attack the Lib Dems directly over the Euro. He would suddenly be in a great position to do this, if the Germans propose a new treaty to save Greece’s membership of the Euro, which could happen before May 6th.

Merkel is trying to get agreement on a new Treaty to raise the funds to save the currency. Clegg will want Britain to support this action, which could cost the country GBP10-20 billion, which we cannot afford. Cameron could then bring this issue to the fore of the election campaign, and insist that a referendum must be held before Britain agrees to bail out Greece and the Euro. Clegg would not be in favour, and the issue would stall his charge, and provide an axis for Cameron to lever Clegg.

The three leaders clashed on Europe, with Cameron saying that voters had been “cheated” because there had not been a referendum on the EU’s Lisbon Treaty, promised by both Labour and the Lib Dems. He added, “What you are hearing from the other two is, frankly, do not trust the people. Do not ask them when you pass powers from Westminster to Brussels. Just give in to everything that comes out of Brussels and do not stand up for your country.”

Clegg said he would offer “a referendum on the fundamental issue [of EU membership], do we stay in or do we go out,” adding that he would campaign to remain in the union. Cameron responded saying, “This idea that what people want is an in-out referendum, I don’t think it’s right. It’s a con.” Clegg also attacked the Conservatives allies in the European Parliament. Brown said: “I am afraid David is anti-European, Nick is anti- American. Both of them are out of touch with reality.”

In the Times, Bronwen Maddox notes that “Nick Clegg escaped a direct challenge about the euro (he, alone of the three, wants to take Britain into the currency zone).” On his BBC blog, Gavin Hewitt argues, “The debate came down to this: the Conservatives will resist any new powers going to Brussels. The differences between Labour and the Liberal Democrats over Europe are slight.”

The Euro could yet light up though, and become a crunch issue. Cameron will be weighing up the pros and cons each day. Due to the German Constitutional Court decision on the Lisbon Treaty, any bail-out of Greece would require a new Treaty, but they will not announce one in time to help David Cameron’s election chances, if they can help it.

But as they wait each day, and try to avoid an announcement of a new treaty, the crisis moves closer to irretrievability. Interest rates in Greece went over 9% yesterday. The sums required are rising to Euro 130 billion by 2012, and even that might well not be enough. The hole is simply getting too big to fill.

An article in Spiegel examines predictions that Greece will need up to €130 billion in aid before the end of 2012 and quotes German FDP politician Frank Schäffler saying “It is possible that Germany will have to make more than €30 billion of euro credit available before the end of 2012…After that it could be more. Greece is a bottomless pit.”

Cameron must be tempted to raise this issue with Clegg. He could start by saying – ‘The price of saving the stricken Euro is very high. If Merkel asks us to fork out to save the Euro, Britain must hold a referendum on this issue alone. Britons must at last be given a choice.’ 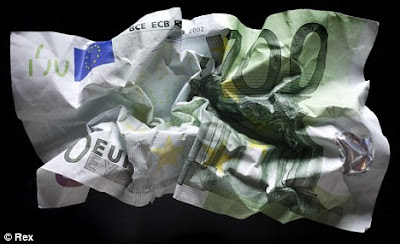 UPDATE – Only today the Greeks are formally asking to be rescued. From the FT,
Greece will ask its eurozone partners to activate a €30bn rescue package following a week of intense pressure on financial markets, the country’s prime minister has said.

George Papandreou, speaking on Friday from the Aegean island of Kastelorizo, said he had asked the finance minister to “take all the necessary steps” to draw down the package.

Apr-22“We believe our European partners will act decisively and provide Greece with a safe haven to rebuild our ship [of state] with strong and reliable materials,” Mr Papandreou said.

Surely Cameron will react to the news, and challenge Clegg to state whether he would ask Britain to put up money for the rescue without a referendum.

4 Responses to “Will Cameron Attack Clegg Over The Euro?”